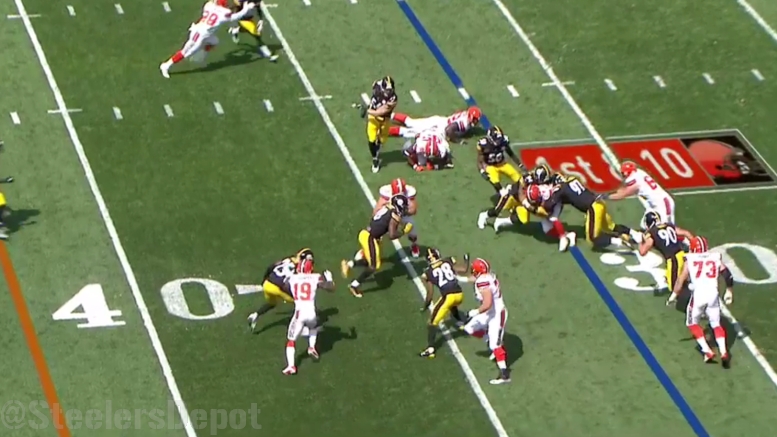 As should be common knowledge by now, the Pittsburgh Steelers required on Sunday the extended services of defensive end Tyson Alualu in the wake of Stephon Tuitt’s arm injury suffered two plays into the game.

The 2017 free agent acquisition as a result actually ended up playing more snaps than anybody else along the defensive line, including starter Cameron Heyward. The former Jaguar had some bad tape on a handful of plays, but overall he was a very solid replacement, which is of course exactly what they brought him in for.

Alualu recorded solo or assisted tackles on five plays throughout his extended playing time, but he also helped to make things happen for his fellow defensive teammates, which is of course often the function of the 3-4 defensive end.

His first tackle came early in the game, with the Browns backed up and facing a second and 12. Lined up over the right guard, he not only showed strong lateral movement, but also a quick read-and-react, picking up the leftside B Gap run and beating his blocker to the spot to make the stop over a one-yard gain.

His second tackle was somewhat less meaningful, as though he held it to just a three-yard gain, it came on second and two. This time over the left guard, Alualu took on a double team and held his ground, but when the center peeled off to pick up Ryan Shazier, the defensive end split inside the gap to make the tackle. If he had had his hands fully free, he could have potentially made the stop.

Later, early in the second quarter, he was back over the right guard in the nickel with Heyward opposite him. The two ran a stunt with Alualu crossing behind Heyward through the leftside B Gap. After Heyward beat his block, the pair both showed gap soundness as Isaiah Crowell looked for a non-existent escape outlet, and joined in on the shared tackle for a loss of one.

Late in the first half, as the one-tech off the center’s right shoulder, he crossed J.C. Tretter’s face with a quick swim move, and his penetration forced Crowell to attempt to bounce the run outside, where he was met by T.J. Watt swimming over and back inside of the blocking tight end to make the tackle after a one-yard gain.

As I said, it was a solid outing from the rotational defensive end, who was called in for some significant playing time. According to Pro Football Focus, he also managed to register a couple of hurries in the passing game, though clearly it was his run defense that was the more prominent on the day.