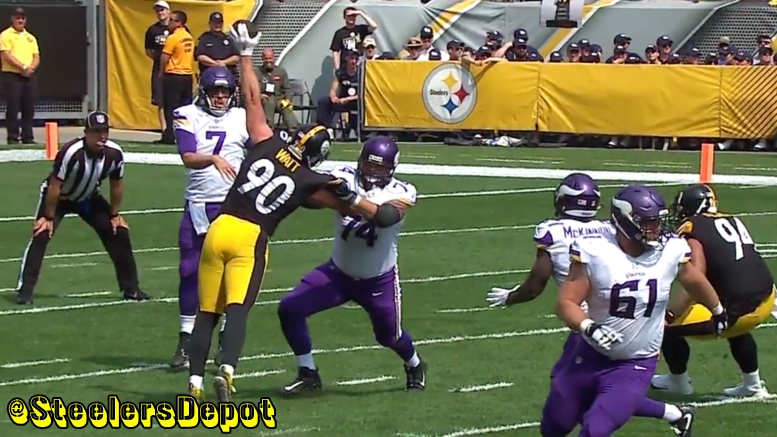 Pittsburgh Steelers rookie starting outside linebacker T.J. Watt may have been forced to bail out of the second game of his career early due to a groin injury, but he did not do so before making an impact on the game, even when he did not record a statistic.

Early in the game, on the Vikings’ opening offensive possession, Watt was aligned on the heavy side of a two-tight-end set. Dalvin Cook looked to bounce off the left edge…and he did, but only because multiple offensive players held, with Watt being clearly held by the two perimeter tight ends. While this could, and should have, been called, it was Cameron Heyward who ultimately drew the flag on this play.

On the very next play, Watt flipped sides, this time coming off the defensive left side. Getting an angle off right tackle Mike Remmers, he was able to keep his outside arm free and timed a leaping swat perfectly to bat Case Keenum’s pass down at the line of scrimmage. He did this twice in the preseason as well.

Another skill that he showed in the preseason is the capacity to make the most of what the offense gives him, including opportunities in which he is left unguarded. One such instance resulted in himself and Heyward combining for a four-yard loss on a tackle of Cook in the backfield, the pulling guard failing to pick him up.

Early in the second quarter, the rookie really showed well working against the run, facing the playside tight end. After engaging to hold the perimeter, he showed the skill to release as Latavius Murray tried to run inside him, this time pairing with Ryan Shazier for a run stop of no gain on second and one.

Still later in the quarter, Watt was left unblocked on a first-down play just outside the red zone with two tight ends to his side. Without even a chip, and an inside linebacker blitz to occupy the left tackle, the edge defender was unimpeded to the quarterback and pressured him into a rushed throw for an incompletion.

It wasn’t long after that sequence—the defense registering pressure three plays in a row to force three incompletions—that Watt was knocked out of the game with a groin injury while covering a punt. I don’t see anything obvious on that play that would signal an injury, and he didn’t seem to think it was too serious, so hopefully he will be back out there on Sunday.