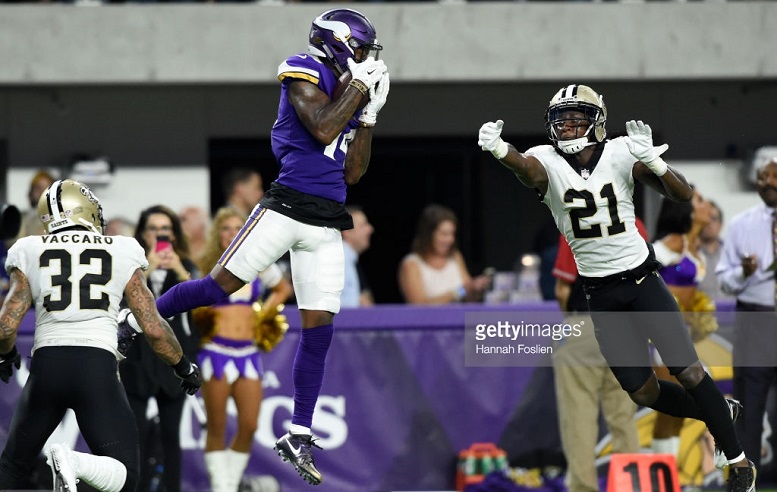 The Minnesota Vikings looked really good in their season opening victory against the New Orleans Saints. Really good may still be underselling it as the Vikings looked downright dangerous in their 29-19 victory. In an opening week plagued by poor offensive showing, the Vikings’ offense was one of the league’s few bright spots.

While the Vikings’ offensive success can be tied to numerous contributors, the heart of its success lies with wide receiver Stefon Diggs. Shuffling through Diggs’ stat line, his 93 receiving yards and pair of touchdowns are easy to spot as being decisive factors in the Vikings victory but his most crucial impact may be invisible to the naked eye. Diggs was a large reason why the Vikings were an almost unstoppable 9/14 on third down – converting three third downs himself and playing a key role in two other third down conversions.

With the Saints in man coverage, Diggs keeps it simple. Lined up on the right side of the offense, Diggs runs a drag route across the middle, easily beating his man and converting his first third down of the day. As it will begin to show in the next clip, crossing patterns on third down were a constant fixture by Diggs and the Vikings offense.

If it ain’t broke, don’t fix it. With an identical situation to their first third down attempt, the Vikings turn to the exact strategy that worked prior. Diggs runs another underneath crossing route over the middle, easily burning Saints middle linebacker A.J. Klein to pick up another first down. The underneath drag route seemed to be the Vikings’ bread and butter on early third downs and will be an area the Steelers’ defense monitors intensely this Sunday. Expect to see both the secondary and linebacking unit work together should Diggs drag across the middle.

While Diggs is not the pass recipient on this conversion, his big play ability deeply impacts the play call’s effectiveness. The Vikings run a sail route combination on the right side (which Alex and Josh spoke of in their Vikings scouting report), with Diggs running vertical, wide receiver Adam Thielen running a corner underneath Diggs and tight end Kyle Rudolph to the flat.

The play works because of Diggs’ elite speed. With Digg’s potential to take the top off the defense, the Saints safety is a fraction too slow to pick up Thielen’s corner route leading to a 24-yard gain and another third down conversion. Helping to sell the play as well is Thielen’s great route running as the wide receiver does not tip his hand on the route until the last possible second.

As they have shown before, the Vikings are not afraid to come back to an identical play call. Here once again, the Vikings run their sail route combination on the right side of the offense. This time you can really see how much of a psychological impact Diggs has left on the Saints secondary. On this occasion, both Saints defensive backs pick up Diggs’ vertical route, leaving Thielen wide open on the sideline.

Including Diggs’ third down touchdown reception, that is five third down conversions that the third-year wide receiver has helped contribute to. The dual threat of Diggs and Thielen will be a tough but vital challenge for the Steelers’ secondary this early in the season. Communication and execution will be more crucial than ever as the team gets set to take on the league’s fastest rising dual threat at the receiver position.