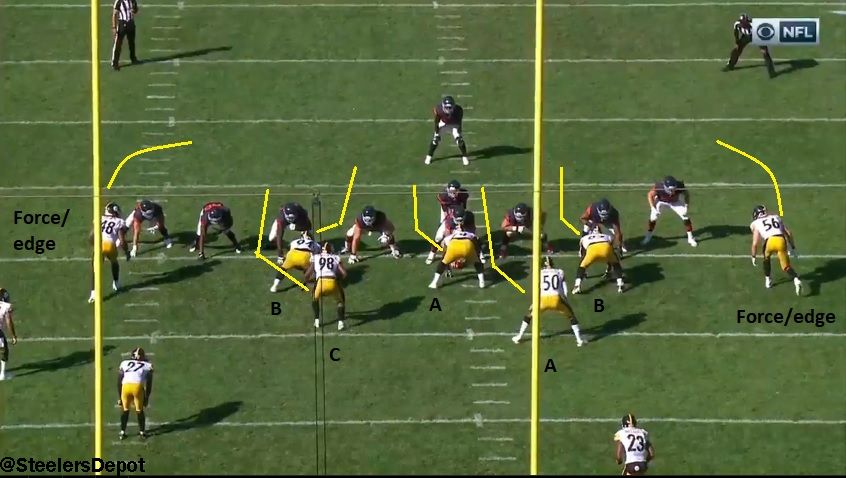 First off, it’s important to point out nearly everything went wrong Sunday for the Pittsburgh Steelers. I thought Javon Hargrave did well…and that’s about it. Heck, maybe with the Coaches Tape, I’ll even find out he struggled. I may go insane if that happens.

But there were certainly a couple of plays and issues that came to mind to allow the Chicago Bears to rack up 220 yards on the ground. Jordan Howard went for 138, Tarik Cohen for 78 despite the Bears having a nearly negative passing attack.

So how did it happen? The Steelers run fits were bad. But some plain didn’t exist. And created wide open lanes to run through.

Let’s start with the end. Here’s the game-winner. Inside zone run to the right but Jordan Howard cuts it back to his left. Steelers in traditional base 3-4. Here are their run fits as they appear to me.

We’re missing one player. An alley defender in the “C” gap, between LT and TE. Generally, that’s a safety but there’s no one in the area. Now, Ryan Shazier, responsible for the weakside “A” gap, has to come across the field and try to make the play. He doesn’t, and that’s on him, but he wasn’t in a position to succeed. No alley fill and Howard scores. 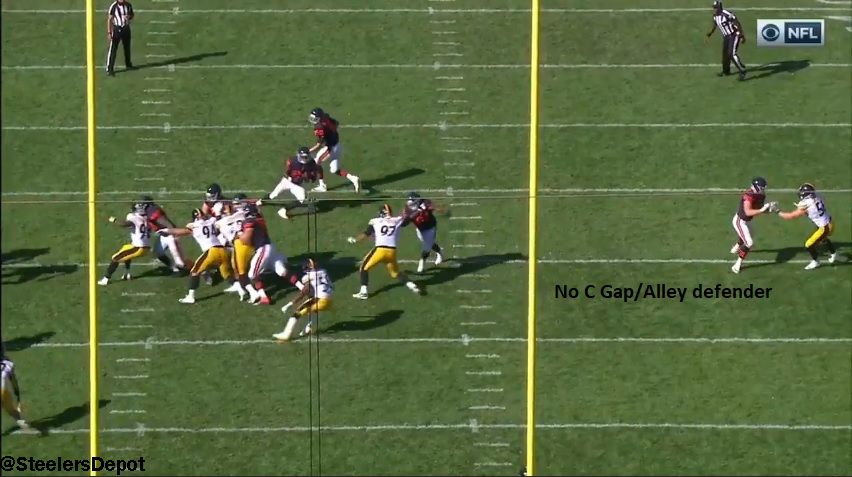 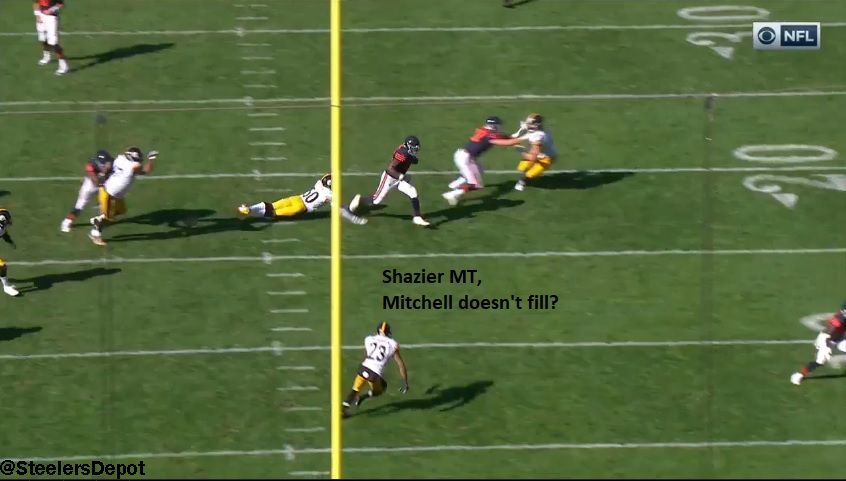 It’s similar to what happened on Zeke Elliott’s touchdown to beat the Steelers last year (and was wrongly blamed for). It looks like Shazier totally guessed; he didn’t, he played his gap. But one gap was left seemingly unaccounted for.

Then there was the plain ugly. Artie Burns…I don’t know what’s going on here. Chickillo forces the ball inside and Burns, just nothing happens. Truly, I have no explanation and when something looks that ugly, it’s tough to understand what the plan even was.

The final issue didn’t seem like one that turned into any huge runs but it left me scratching my head. The Steelers have run their 3-4 shifted front with the nose tackle cocked and the shift-side linebacker lined up off ball. Usually, this is done to the strong side of the formation.

But against the Bears, they often shifted to the weakside. Like here. Shifting away from the tight end. So the Bears were able to count numbers and run away from the shift. This isn’t even their true “4-3” front but it’s shifted weak all the same. 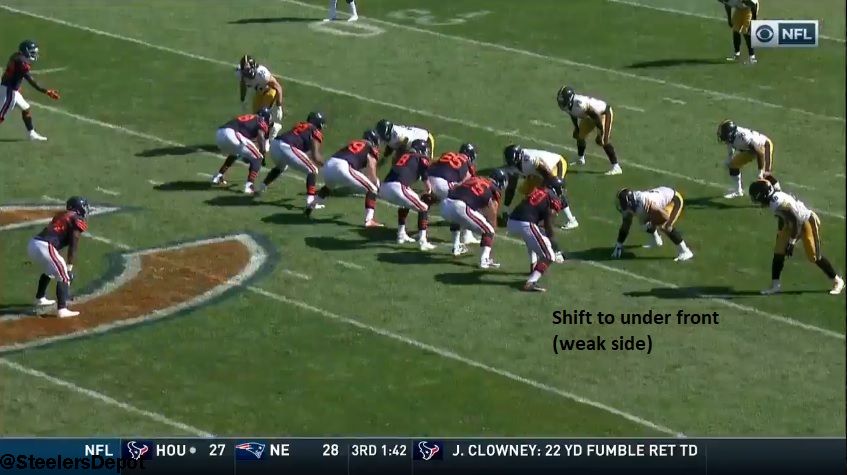 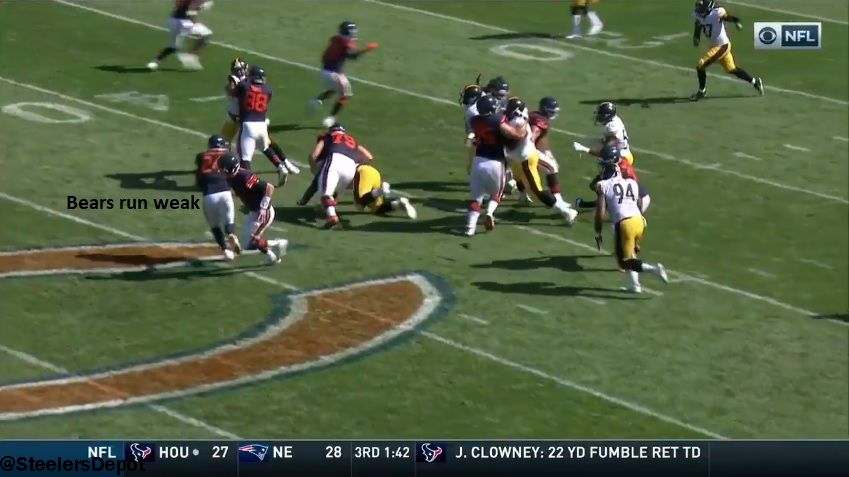 Here, they’ve shifted strongside but it’s against heavy personnel. There’s a tight end to the boundary but there aren’t enough bodies in the box. From the center to the tight end, the Bears have four blockers. From the center over, there are only three Steelers’ defenders: Bud Dupree, Hargrave, and Shazier. Four vs three, Steelers lose. 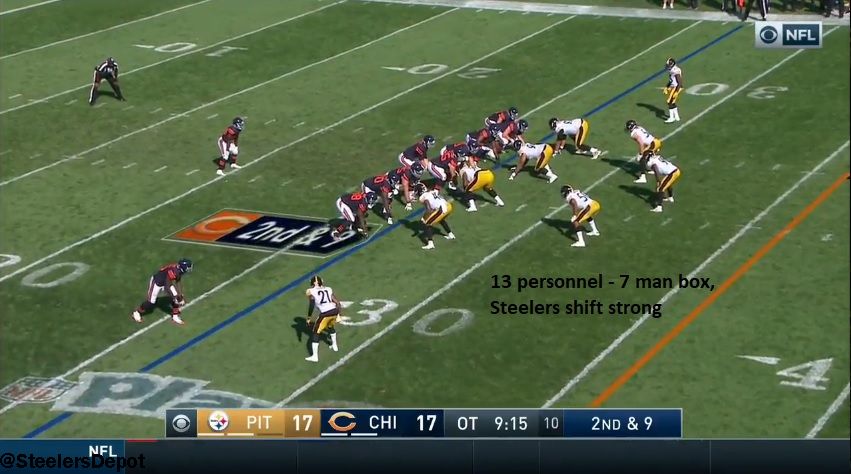 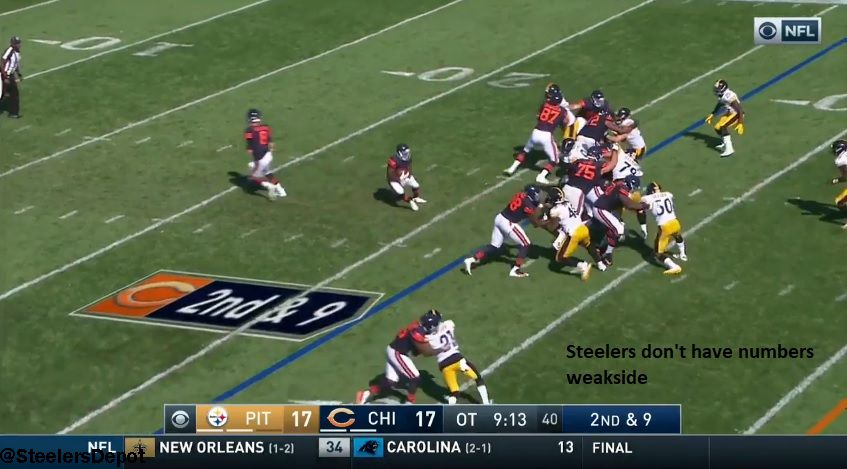 Where is the safety coming down in the box vs 13 personnel? Why only a seven man box on 2nd and 9 against a team who can’t throw a lick?

Now, Joe Haden gets held like crazy. But no one was in a position to succeed.

Here is the same issue. Fire X blitz. The assignments. Steelers shift to the weakside of the formation. 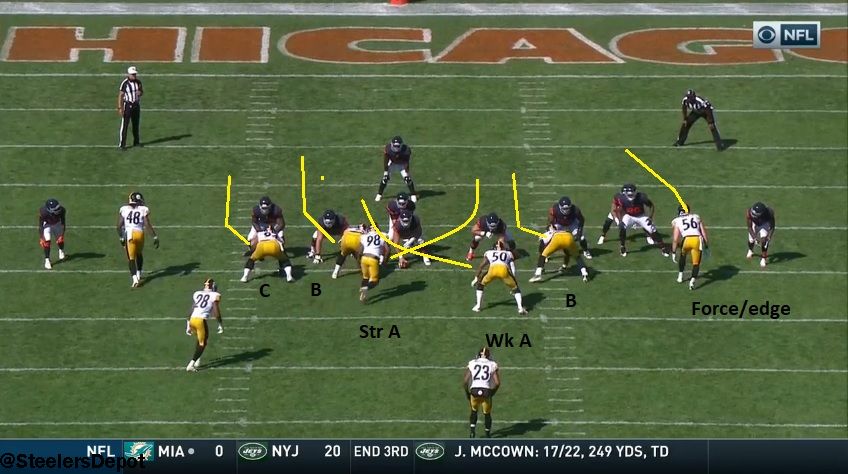 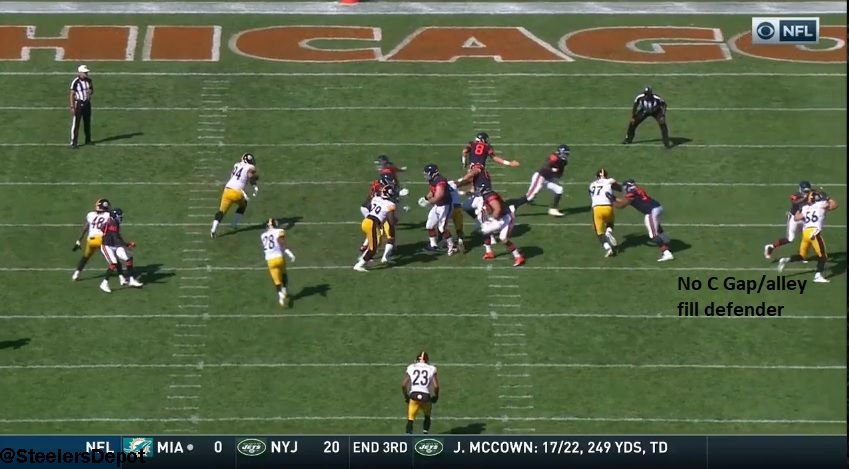 Again, who is the C gap defender? The safety? No one fills the alley. Another big run.

And it got weirder. At one point in the game, the Steelers shifted strongside. But the Bears simply responded by motioning their tight end to see how the Steelers’ DL would react. Here, they shifted over a gap and the SS walked off the ball with the tight end away. That seems like a logical reaction.

But here, they don’t. If I’m an offense in the future, if the Steelers’ DL doesn’t respond to that shift, I can get them out of position and force them to play an under (weak) front on each run.

Maybe there’s another layer I’m missing but it looks like it could be an issue.

There’s a lot going on here so let’s summarize the biggest issues.

1. Individual breakdowns. Missed tackles and poor angles to the football.

2. More importantly, schematically, it seemed a mess. There were gaps left free the Bears easily exploited and weird front choices that put the Steelers in bad positions to succeed.