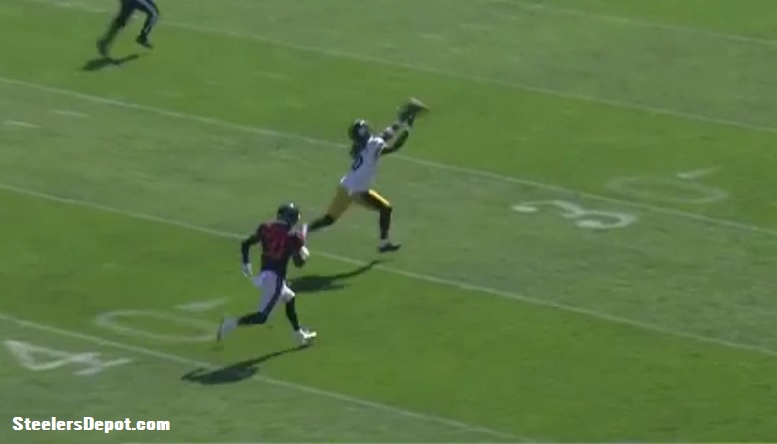 It was another disappointing road effort for the Pittsburgh Steelers Sunday as they were defeated by the Chicago Bears. Though there were many significant moments during Sunday’s affair that can be pinpointed as a missed opportunity, none were perhaps more tone setting than the Steelers’ first offensive play.

As the football released out of the hands of quarterback Ben Roethlisberger, it seemed evident that the Steelers were poised to strike first. The pass’ target, wide receiver Martavis Bryant, had five yards on the nearest Bears’ defender. For a brief few seconds, worries of the Steelers’ road struggles seemed suspended in the air as it headed towards the fingertips of Bryant. And then just as fast as the worries had been put aside, it came crashing back down to earth, falling right through the fingertips of the Steelers wide receiver.

Though on the broadcast, Bryant’s dropped pass looked to be as close to a pure drop as one could get, perhaps there was more to the missed opportunity than just a pass that slipped through the receiver’s grasp. Taking a glance at Bryant’s route, the lightning-quick receiver seems to slow down for a fraction of a second as he turns to locate the ball.

Very similar outcome for Bryant who is located on the left side of the offense. The 6’4 wide receiver runs a go route down the sideline, once again turning his head and slowing down in the process. Roethlisberger was visibly frustrated after the play and for good reason. There are not a lot of defensive backs quick enough to keep up with Bryant, meaning every incomplete pass is a missed chance to capitalize on an offensive strength.

A different approach here but still the same result for Bryant. Running another go route, Bryant opts to cut towards the middle of the field while Roethlisberger expects the receiver to continue down the sideline. More of a communication problem than the previous examples, it is obvious that Bryant and Roethlisberger have still not yet developed their deep ball telepathy.

In a 60-minute game, a millisecond may not seem like much but for a receiver and quarterback who thrive off the deep ball it is the foundation of their success. With the Steelers’ offense facing scrutiny over their lackluster play, a couple milliseconds could go a long way in improving the production of the unit.