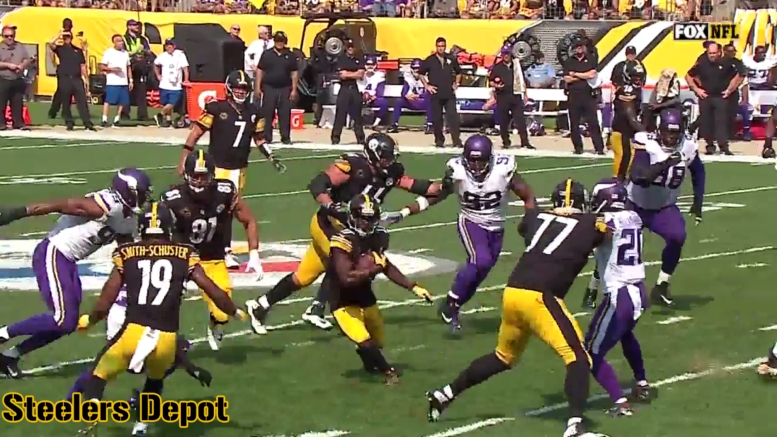 I don’t know whether or not Pittsburgh Steelers right tackle Marcus Gilbert is going to be able to suit up on Sunday to play against the Bears, but it will be unfortunate if he does not, because he has been playing at a high level. According to Pro Football Focus, for example, he is one of just a few tackles who have yet to surrender a pressure this season.

The seventh-year lineman suffered a hamstring injury in the fourth quarter of the team’s victory over the Vikings, but up to that point, he was having a strong game, both in pass protection and in the running game, even getting himself out on the move.

Late in the first quarter, for example, the Steelers asked him to pull on a dart scheme, looping around left guard, picking off the outside linebacker and helping to open a hole for an 11-yard gain for Le’Veon Bell.

About midway through the second quarter, Gilbert was able to draw the left defensive end deep around the pocket, and it was fortunate that he did, because center Maurkice Pouncey was driven virtually into Bell’s lap. Had it not been for the wide berth the right tackle afforded, he probably would not have found a hole for a nine-yard gain here.

A few plays later comes an excellent example of the rapport that he and David DeCastro have built over the years. Facing a third and 10, the Vikings tried a tackle-end stunt that the two executed perfectly. Unfortunately, the pass sailed high and incomplete, but not because of the protection.

On one rep in pass protection late in the first half, he did an excellent job of countering the defensive end’s spin move, keeping his feet set and not overcommitting his hands, re-establishing his base once the defensive lineman was facing forward again.

Much later in the game, however, I did see him get caught once, and by the same player. This time, fearing an inside rush, Gilbert overcommitted in that direction. Once that happened, he lost his hand positioning and the defensive end was able to spin completely around him with a path to the quarterback.

I suppose it could be debated as to whether or not that constitutes pressure, as the pass did get out cleanly without the quarterback moving. Regardless, it was a strong game overall for the right tackle, and his absence will be felt if he is not out there Sunday.