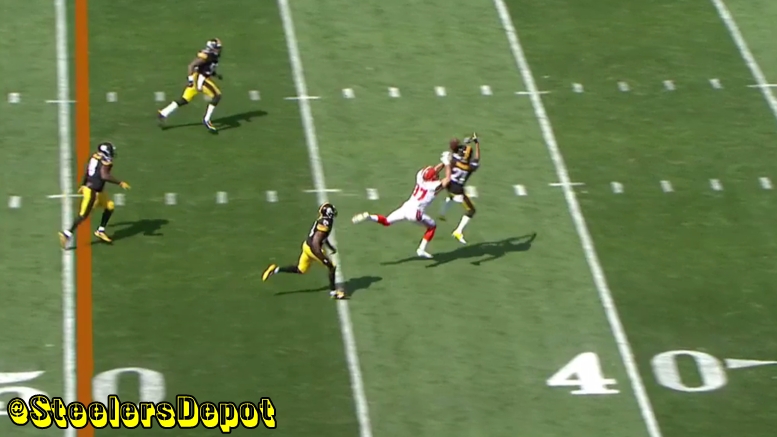 While we did not get a chance to see new Pittsburgh Steelers cornerback Joe Haden during the preseason, having only been acquired the night before their final game, he did suit up and play all but one snap on defense—plus logging time on special teams—for the team on Sunday.

It’s almost always the case that a player has his ups and downs, but it would be especially common for a player adjusting to a new team, and that accurately describes Haden’s debut. One of the first plays he was involve in was a positive, though, as he was able to make the open-field tackle on a bubble screen to Ricardo Louis to hold him to three yards on second and four.

Early in the second quarter, able to work in the zone and read the quarterback, the veteran was able to break on the seam route on Seth DeValve. The pass was high, but the veteran cornerback was in position to break it up anyway, having a shot at an interception on second and 11. This was his lone pass defensed of the game.

While it was not a major flub, however, he did come back on the next play to miss an open-field tackle on the second-year tight end up the right sideline, which allowed him to record a few more yards after the catch.

Later in the quarter, the Steelers clearly flubbed coverages, as they essentially had four players initially carrying the left slot receiver shallow, leaving open the intermediate depth for Louis to come over the middle on a dig for the 19-yard gain. Once Haden realized this, he had to chase, since nobody else was getting there.

On the following play, the Browns very nearly converted deep over Haden’s head up the right sideline, but the receiver’s right foot stepped out of bounds. Here you can see Sean Davis biting on the skinny post as the ball is coming out.

Corey Coleman did get the better of him in man coverage early in the second half, first showing a five-yard comeback, which Haden played well, but then breaking back in a second time 15 yards off the ball for the back-shoulder reception. The Browns and Coleman know Haden’s tendencies well and they played off of them here to get him flipping his hips in transition.

All in all, there were some rough spots for the former Pro Bowler in his first action as a Steeler, but it could have been worse. There were times he wasn’t targeted in which he also lost vertically, however, something he needs to clean up against quarterbacks not making their first start.