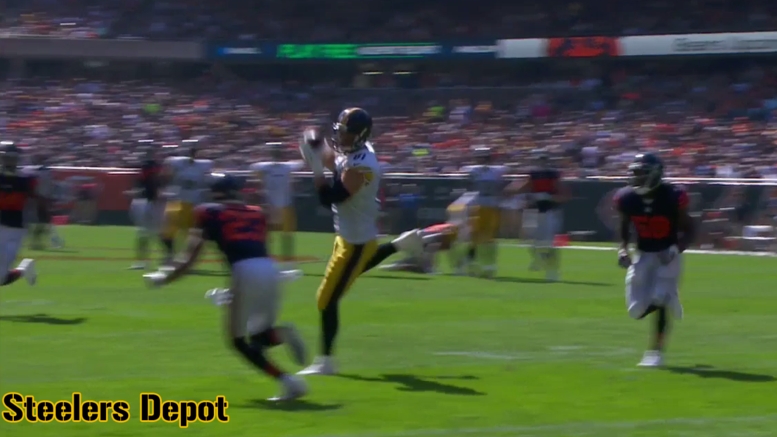 Since kicking the year off with a pair of touchdowns in the Pittsburgh Steelers’ regular season opener, third-year tight end Jesse James hasn’t exactly lit things up. He did actually have one reception against the Vikings in which he somehow—perhaps accidentally—made a tackler miss, but generally speaking, and seemingly on principle, his game is not very exciting.

Which is fine, of course. The ‘traditional’ tight end role is not necessarily one that is going to get featured a lot on the highlight reels. And as Vance McDonald said last week, the Steelers do use their tight ends differently—or more with greater versatility—than most teams do.

In spite of the fact that he missed a stretch of several plays during the game after taking a big hit on a reception midway through the second quarter, James has continued to be used as something of a workhorse tight end to date. That could change in the future, but for now, he is still the staple at the position. And he does a bit of everything.

Not spectacularly, either. Often, he just does enough to get the job done, as he did on this 10-yard run late in the first quarter, the only problem with the play being that it was wiped out by an illegal shift penalty. But James was able to hold his block just long enough to keep the hole open.

As mentioned above, he did come up with one notable reception, and it is notable for the degree of difficulty after the catch. He took a big hit here, but he held on to the ball. He missed all but one of the remaining snaps of the first half after this, but he came back and played all but two in the second.

Something he hasn’t been asked to do a whole lot is stay in for pass protection. The Steelers used to ask this of their tight ends much more frequently in the past, but they have reduced this role over the past few years. James does a very nice job here of walking the edge rusher around the arc and staying in front of him the whole way.

In yet another way that they like to use their tight ends, he pulled here, I believe later on the same drive still, but the run was slow to develop with the left guard allowing penetration and throwing off the lane.

I mentioned before that sometimes he does just enough to get the job done. Sometimes he fails to do enough, walking a fine line. In a play similar to the one that we started off with, here he struggled to keep the lane open, and the defense collapsed the hole.

James has already gotten banged up twice this season, yet it hasn’t much affected his playing time, and that in and of itself is worthy of some mention.