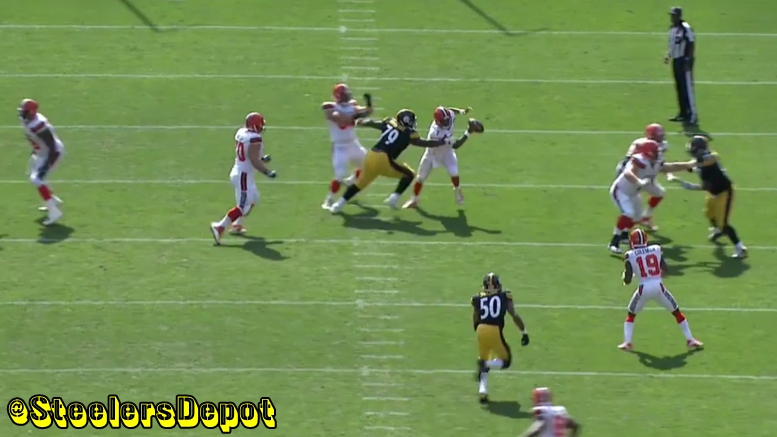 Pittsburgh Steelers second-year defensive tackle Javon Hargrave did not log for himself a heaping helping of snaps during Sunday’s regular season opener—just 25 of 66 defensive snaps—but he made the most of the snaps that he did get, and that included registering a sack, while nearly having another to his name.

It is actually a bit surprising that the former third-round draft pick did not see more playing time in the game, considering the fact that the defense lost Stephon Tuitt on the second snap, but the Steelers seemed mostly to want to keep him in at nose tackle, allowing Tyson Alualu to take over Tuitt’s role.

In fact, only about a third or so of his playing time came outside of the Steelers’ 3-4 front or at the goal line, and in those fronts he remained at the nose. Given the short notice, however, I would not be surprised if he sees a more diverse role on Sunday should Tuitt miss the game.

His play, after all, certainly did nothing to dissuade from playing him, and he clearly got the better of Cleveland’s new free agent signing at center, J.C. Tretter, really making him look bad on a few snaps.

One of those snaps came early in the second quarter, which Hargrave at the zero technique. Off the snap, he took a false step to his right before swimming over Tretter’s right shoulder to burst into the backfield. DeShone Kizer had to spin out of contact and by then could only scramble. Unfortunately, Ryan Shazier drew a penalty here for a late his.

Later, early in the third quarter, he was again set head over center, this time against the run on first down. While he was ultimately credited for the run stop here following a two-yard gain, the play was really enabled by the cohesion of the front seven retaining their gaps

Early in the fourth quarter, his persistence finally paid off, embarrassing Tretter once again to record the fourth sack of his career, and the first of year two. Again, lined up right over the center, he tried to swim over the same way as the earlier pressure, but when that failed, he simply bull rushed Tretter into the backfield.

Kizer nearly tripped over his center’s foot as Hargrave bent him over backward, at which point the nose tackle shed the block and chased the quarterback as he flushed to his left, dragging him down for the sack. The only negative on the play was that he lost his balance on the celebration, and that’s a knock I can live with.

He wasn’t quite done putting the moves on the Browns’ free agent acquisition though, as later in the quarter he got another pressure, ripping under his right shoulder and using his right arm to create separation as he rushed into the backfield. Kizer ultimately escaped and got off an inaccurate long ball.

The way that Hargrave has played this preseason and in the regular season opener, as long as he actually gets the playing time, it’s hard to imagine he doesn’t come up with a half-dozen or so sacks this year. He is going to be a nightmare for interior linemen, and can be an important weapon getting pressure up the middle for quarterbacks who like to get the ball out quickly.