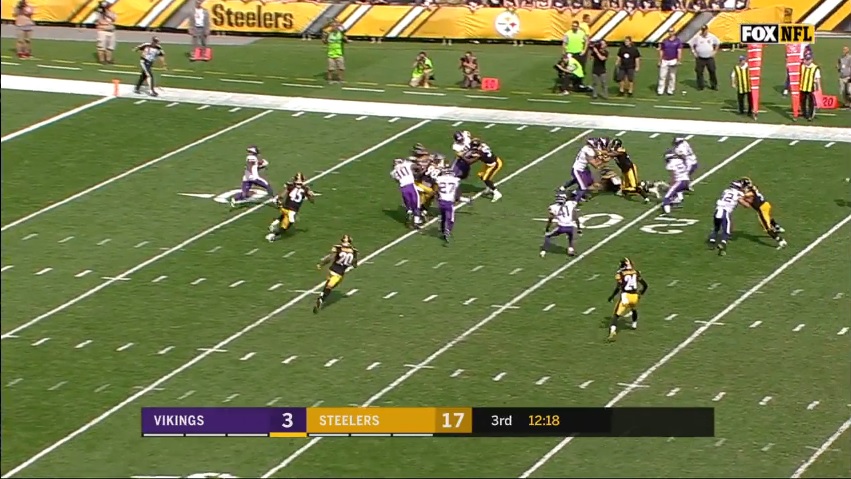 Unfortunately, we’re probably not going to hear much from Danny Smith this season. There’s only one Coordinator’s Corner interview per week and we’re likely to hear from Keith Butler and Todd Haley throughout. So when we can jump on special teams, we will.

The special teams unit has been strong across the board this season but the kick coverage especially so. One reason for that unit’s success has been a wrinkle Smith has added this year. On a pair of returns this year, both positive outcomes for the Steelers, Smith has “stunted” two coverage players, exchanging lanes, and stressing the blocking scheme.

Here are two clips from the first two weeks.

Really like what Danny Smith is doing on kick coverage. Stunting to change lanes, confuse blocking scheme. Returns to the 11 and 17. pic.twitter.com/6a3omn4Iip

Just like Keith Butler running a Fire X scheme on defense, this serves the same purpose. It’s hard for the blockers to identify and communicate passing the players off. And when you have talented players on those units, like Vince Williams and LJ Fort (the latter now on the practice squad) it’s all the more effective.

While the Steelers are allowing 22 yards per return, that includes yards out of the end zone. On the three kick returns teams have taken out, they’ve only gotten back to the 11, 17, and 18 yard line. Great results for Smith’s units.

At the end of last season, it felt like Smith’s job could be in jeopardy. Right now, no one is entertaining that idea. And for good reason. Schemes like this is giving the Steelers an edge.