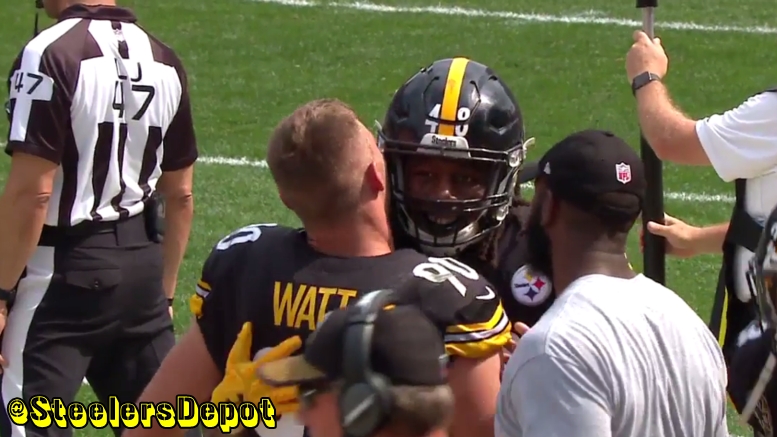 It might be hard to stomach in the wake of Sunday’s loss, but I don’t think there were really many players on the Pittsburgh Steelers’ defense who just flat out had an all-around day, the more that I go over the game.

The issues are more of what Mike Tomlin would describe as a ‘popcorn’ nature, with a little thing here and there popping up. Often times the issue was not any one specific player failure, but rather miscommunication between players or a misidentification of assignment.

While Bud Dupree may have missed a tackle or two during the game—I recall one play on which he penetrated into the backfield but couldn’t finish off the tackle, and another down the field on which he tried to shoulder tackle, but the runner bounced off—I didn’t think that his showing was bad overall.

In fact, I saw a number of things that I liked, including an impressive three-play sequence to start the second quarter, two of which I will talk about here.

On first down, Dupree did a nice job of dropping into his zone in coverage, releasing the tight end after he failed to work into the flat. He was well-positioned when Mike Glennon tossed it off to the running back, Jordan Howard, whom he was quick to chase out of bounds following a two-yard gain.

On the next play after that, he and Ryan Shazier paired to force the Bears’ other running back, Tarik Cohen, out of bounds for a loss of four yards. With Shazier jumping the gap and Dupree manning the perimeter, keeping his outside arm free, the back had nowhere to go.

Deeper into the game, toward the end of the third quarter, one of his dips up the arc actually looked like it might finally work. He really showed nice bend again, something he has been doing much more consistently so far this year, but he couldn’t quite keep his balance around the edge. Javon Hargrave finished things off for him on this play.

One of the qualities that Dupree has adopted since he has been here has been maintaining a requisite energy level and hustle when he is on the field. For the most part, I think he has handled the backside pursuit well, this tackle in the fourth quarter serving as a good example of that.

It certainly wasn’t the best game of Dupree’s career—and one wonders what is up with his shoulder at the moment—but I think he has shown overall improvement in his game, in different areas of the field.