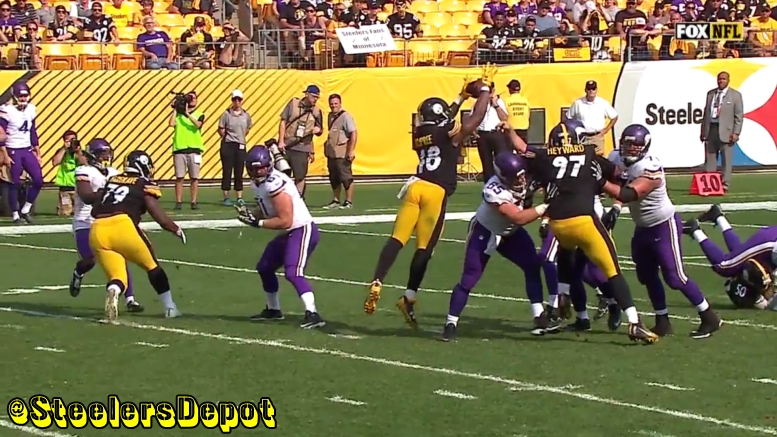 It was certainly a pleasant sight to see Pittsburgh Steelers third-year outside linebacker Bud Dupree back out on the field after he sat out the season opener. It was even more exciting to see him out there and playing well.

Not that he turned in a flawless performance, and he can still stand to generate pressure at a greater rate of frequency, but he is clearly coming along, cutting out some of his failings and improving upon some of his strengths, both as a pass rusher and as an edge defender against the run.

And the Steelers did not use him conservatively, as he played all but two snaps during the game. Officially, he was only credited with two tackles during the game, but he also recorded his first sack of the season and also batted a pass down at the line of scrimmage.

His first big play of the game arrived late in the first quarter on third and 13. After the tight end released him, the right tackle was out of position and Dupree beat him to the inside, helping to influence an errant pass.

A bit later, early in the third quarter, the Steelers moved to their ‘over’ front with Dupree lined up at linebacker depth behind the defensive line. At the snap, he rushed through the gap and made early contact, making the tackle after a two-yard gain. It was a solid play in isolation, but unfortunately it came on third and one.

Toward the end of the first half, the former first-round edge rusher showed off how bend, dipping the shoulder under Mike Remmers, the right tackle, and taking a sharp cut into the pocket. While this ended up in a six-yard reception, it shows off the progress he has made as a pass rusher.

He finished off the job two plays later on third down, catching the tackle slow off his kick slide and simply winning the arc with his impressive speed. It seemed to happen all too quickly for Case Keenum, who could do little but flinch and duck in taking the sack.

Late in the game, he was able to race around Remmers again, but this time the lineman decided to take matters into his own hands—literally—dragging him down. The officials saw this and docked him for a holding penalty.

Several plays later on the same drive, Dupree cut his rush to the inside. The line seemed to inadvertently leave him somewhat free, and as a result he was able to get up and bat Keenum’s pass back into his face.

It was a good first showing of the season for the starting left outside linebacker, though some further honing is never a bad thing. We can only hope that he is past the shoulder issue and ready for a strong season.