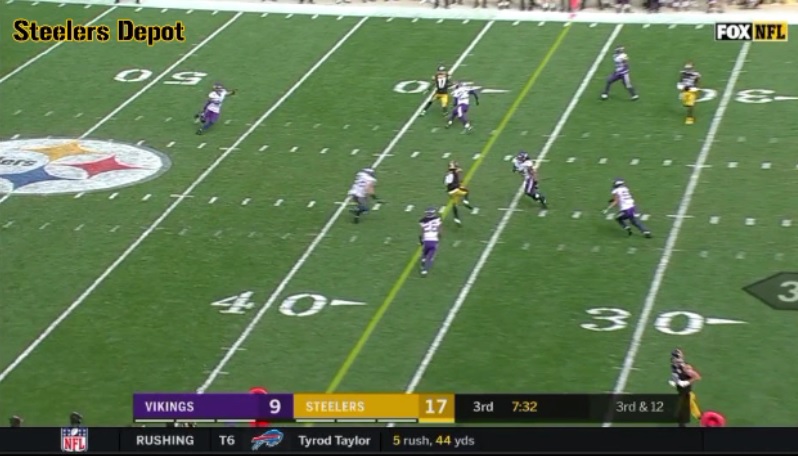 The Pittsburgh Steelers Sunday win over the Minnesota Vikings included several key plays on both sides of the football, but there seems to be one that was made by quarterback Ben Roethlisberger and wide receiver Martavis Bryant that isn’t being talked about.

With 7:32 left in the third quarter and Pittsburgh leading Minnesota 17-9, the Steelers offense faced a 3rd and 12 at their own 25-yard-line. A failed conversion on that down would have resulted in the Steelers punting the football back to the Vikings, whose offense seemingly had a little bit of momentum at that time being as they had just scored their first touchdown of the game on their previous possession.

The Steelers offense, as you would expect, had their 11 personnel group on the field for that 3rd down play with Bryant lined up on his own on the left side and just inside the numbers. As for the Vikings defense, they showed a two-deep safety look with both of those players roughly 15 yards off the line of scrimmage and thus guarding the sticks.

At the snap of the football, the Vikings quite expectantly playing zone coverage underneath their two high safeties and Bryant ran a quick slant to the hash-marks. As you can see in the two views of the play below, the Vikings zone coverage really doesn’t allow much room in the middle of the shrinking diamond.

While Roethlisberger’s pass to Bryant was probably as perfect as it could be considering the coverage, the reception was still made just short of the chains with one of the two safeties closing quickly. Bryant not only made the catch, he absorbed a few hits before finally hitting the ground right at the first down marker.

Not only did that play move the chains, the Steelers offense followed it up with a deep 51-yard completion to Bryant down the left sideline after the Vikings jumped offsides just prior to the snap.

While that Steelers drive ultimately stalled at the Vikings 11-yard-line, kicker Chris Bowell easily connected from 29 yards out to give Pittsburgh a 20-9 lead with just over five minutes left in the third quarter.

Bryant is obviously known for his big play ability over the top. Against the Vikings, however, he also showed improvement in his short area receiving game as not only did he convert that aforementioned short 3rd down slant into a key first down, his first catch in Sunday’s game, also a quick slant and against off coverage on 1st and 20 from the Vikings 27-yard-line, resulted in a touchdown.