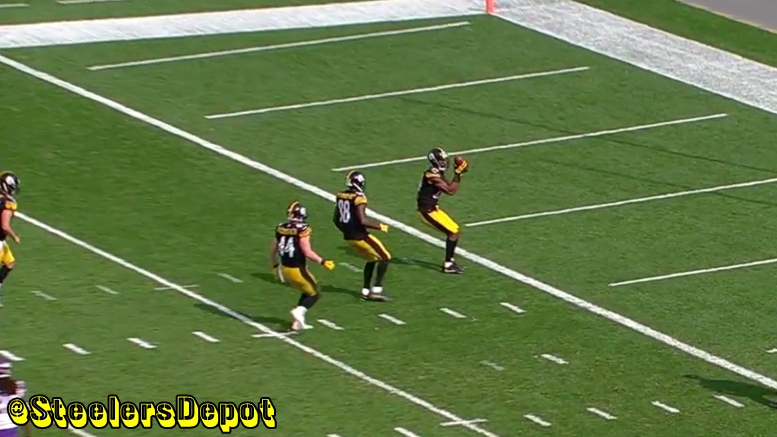 I don’t know what kind if defensive player Brian Allen is going to become over the course of his career, but I already see the potential for him to be a meaningful contributor on special teams at some point in his career, even if the Pittsburgh Steelers’ fifth-round rookie cornerback will struggle to consistently dress for games.

Because the team had three injuries on Sunday, he did get a chance to dress, and when he was given chances to participate on special teams, he generally made the most of them, playing as both a gunner and then seeing some time as a jammer late as well.

The first opportunity he saw at gunner came in the middle of the second quarter, on which the Steelers pulled Darrius Heyward-Bey inside on the opposite side of the field, leaving Allen as the lone gunner. The Vikings countered with two jammers, the second trailing late, but the rookie was able to get down the field, and nearly made the tackle on the return, showing some physicality in his efforts.

Later in the quarter, the Steelers this time moved Allen rather than Heyward-Bey inside of the punting formation and asked him to block in protection, a role that he carried out well, actually blocking two players.

Finally, at the end of the half, both gunners were on the boundaries together, and the two of them combined to get down the field and induce a fair catch. There is a satisfying synchronicity watching this replay, I must concede.

Now in the second half, five minutes into the fourth quarter, the Steelers punted from the Vikings’ 34-yard line, so it wasn’t too hard for the gunners to get down the field, but Allen did so in a hurry, buying himself time to turn around and locate the ball, giving him the opportunity to track it and field it, downing the ball at the one-yard line.

As I mentioned, he also got a couple of snaps as a jammer, including on the Vikings’ next punt. On this play, Heyward-Bey played inside coverage and ultimately helped Allen wedge the left-side gunner, basically taking him out of the play entirely.

I understand that all of Allen’s supporters are anticipating seeing what he can contribute as a 6’3”, 215-pound cornerback on defense, but for now, I am pleased with what I am seeing from him as a special-teamer. That alone should buy him time as he develops his craft.