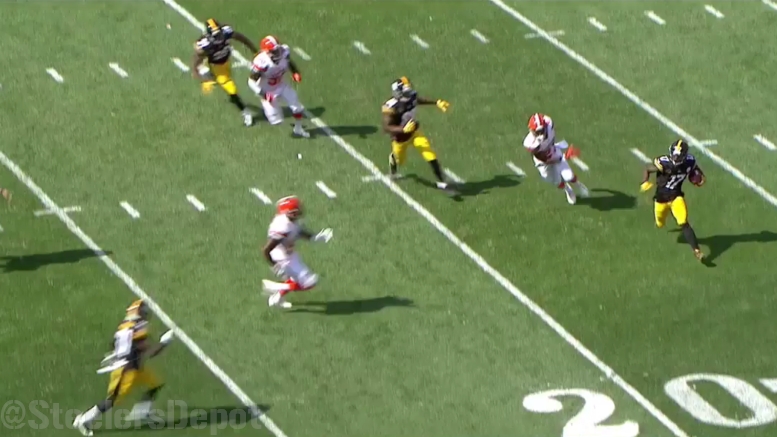 It appears to me as though the Pittsburgh Steelers have finally resolved to remove All-Pro wide receiver Antonio Brown—he of a $17 million a year contract—off of punt return duties, fully replacing him with third-year wide receiver Eli Rogers, who in yesterday’s game was able to field and return three of them for a total of 30 yards and a respectable 10-yard average.

This is something that of course has long been in the works and was not at all surprising to see, as they have been attempting to find a replacement for Brown in this role for some time now as he has gradually ascended into the best wide receiver and among the most valuable players in the game—as his performance yesterday showed.

As a matter of fact, they were hoping that Rogers would be the player to replace him a year ago, and in fact, as I have mentioned recently, he was actually their primary punt returner through the first three games of the season, but after suffering a foot injury in that third game, that strategy was largely discarded for the remainder of the season.

Now, after a full year’s worth of playing time under his belt, and another year removed from the foot injury that landed him on injured reserve during his rookie season—he told reporters earlier this offseason that he felt faster than he was a year ago—it looks like it is his job to lose.

Last week, in the buildup to the season opener, he told reporters that he was the only one even fielding punts in practice. While Brown doesn’t need a lot of practice reps, one would think that he would at least take a couple.

Rogers’ day did start off as easily as it can for a punt returner, as the Steelers managed to record a block that was recovered for a touchdown. A positive play for the return team in which the punt returner does not even have to touch the ball is no doubt always a welcome sight.

His first actual opportunity of the season to return a punt came about midway through the first quarter. Off a long 58-yard punt, Rogers was driven back to his own 15 to field it. Though he didn’t have much space to work with, he was able to work inside one player to get 11 yards and get out of bounds without contact.

The Browns’ punt coverage unit stepped up in the second half and was able to pin the Steelers inside their own 15 on back-to-back drives, and his best-looking return had to wait to the fourth quarter, picking up 13 yards off another long, 61-yard punt.

It should go without saying that we are going to need to see a larger body of work from Rogers in this role to really determine what he can bring, but he is off to a fair start. Each week will increase our sample size.