A mere 2 plays into the 2017 season, Pittsburgh Steelers DE Stephon Tuitt’s day was done.  Fresh off signing a contract extension worth $14 million guaranteed this season, the former 2nd round draft pick was looking forward to a monster season.  Instead, it looked like his season might be over…if you believe Adam Schefter.  A couple of twitter doctors (myself included) felt more optimistic, and I’ll explain why in a minute.

On the second play of the game, Tuitt dodged a TE with a blocking assignment to chase Browns RB Isaiah Crowell out of bounds, grabbing him with both arms but not actually tackling him.  As the defender slowed at the end of the play, he grabbed his upper right arm.  Tuitt didn’t report hearing a popping noise and described it as “my arm kind of went numb from just flicking it out a little bit.”

Here’s the play, and you can see that nothing all that dramatic occurs:

Here is the EZ view of the play that #Steelers DE @DOCnation_7 injured his bicep on. pic.twitter.com/I5WC6XrYEi

Trainers suspected a biceps injury and held him out for the rest of the game as a precaution.

After a night of dread, Steelers fans heard good news from defensive captain Cameron Heyward, who first tweeted “Fake news” and later claimed that the injury would not be season-ending.  This was confirmed by Coach Mike Tomlin at his weekly press conference today, describing the injury as “day-to-day” and said that it’s even possible that Tuitt could play this Sunday when the Steelers host the Vikings for their home opener.  The head coach acknowledged, of course, that it would depend on function, strength, and Tuitt’s ability to play effectively.

So what really happened to Tuitt and what does it mean for his recovery and return to play?  The team has referred to his injury as a biceps injury, which is a pretty vague term.  At his presser today, Tomlin added no detail.  Nothing has been said about the MRI results from Monday other than everything is “pretty good” and “better than it could have been”.  So as always, I will be doing a little educated speculation here.

The shoulder is a ball-and-socket joint, with the head of the humerus (the upper bone in the arm) sitting in a rounded space in the scapula (shoulder blade).  Several muscles and tendons keep those bones in the correct orientation both at rest and when moving.  These tissues form the rotator cuff. 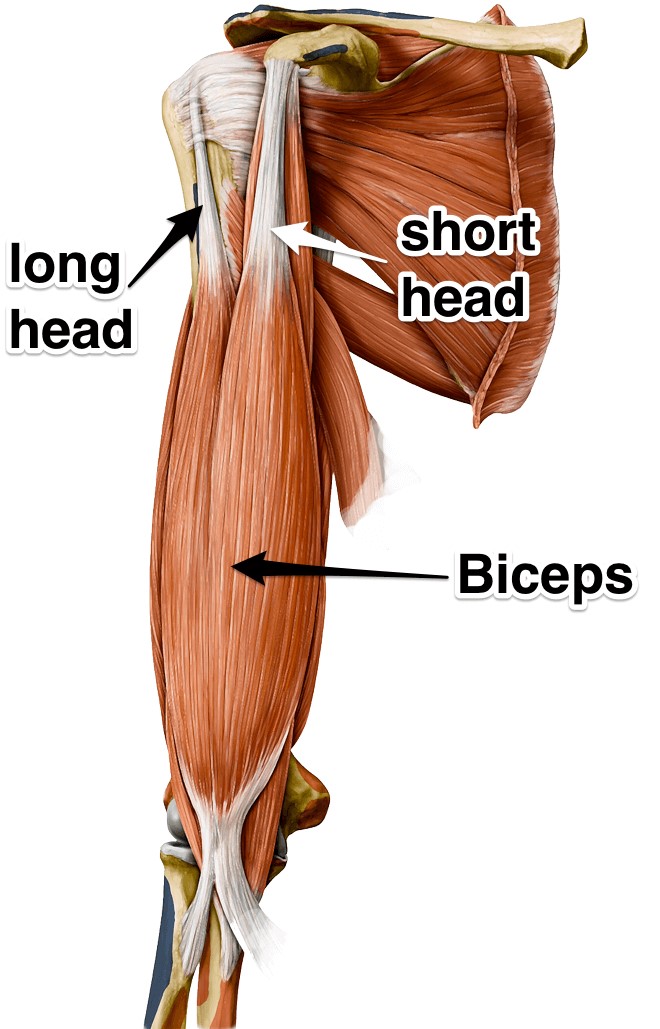 The biceps muscle helps to flex, or bend, the arm, as well as rotate it (supination, which is moving the arm from the palm up to the palm down position).

Biceps tendon tears can be partial or complete (where the tendon is totally detached).

With both proximal and distal tendon tears, a “pop” can sometimes be heard.  This would typically indicate a complete tear.  Sudden, sharp pain is the next thing a player might notice.  Bruising on the front of the arm, cramping of the biceps muscle with use, and weakness in the shoulder and elbow are also common, as well as difficulty turning the arm from palm up to down.

Visually, a deformity in the muscle can be seen with a complete tear.  If the proximal tendon is torn, the muscle mass is displaced further down the arm with a dent just below the shoulder where the muscle is no longer in position.  This is known as the “Popeye Muscle”: 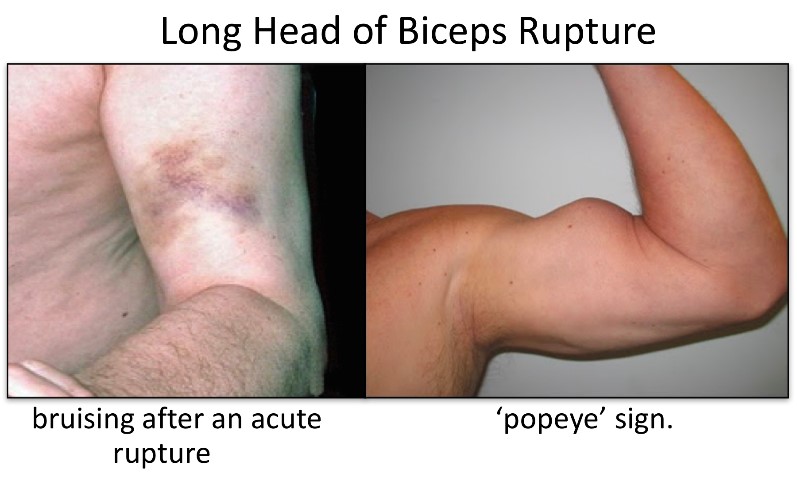 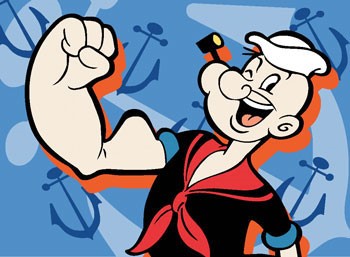 If the distal tendon is torn completely, the muscle retracts up the arm, forming a bulge closer to the shoulder: 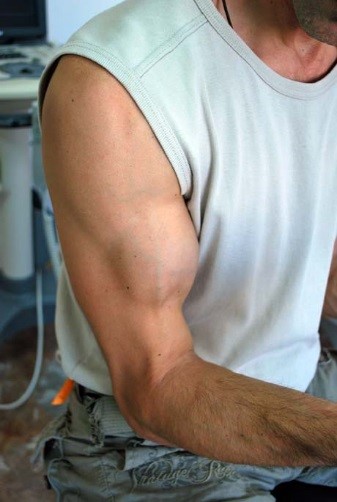 Initial treatment, like so many other orthopaedic injuries, includes ice, NSAIDs, rest, and physical therapy.  A tear of the long head of the biceps tendon often does not require surgery.  If pain or weakness persists, than a repair is recommended.  This can often be done arthroscopcially (small incisions and a telescope).  The goal is to anchor the tendon back onto the bone.  A distal biceps tendon rupture does require surgical repair.

Let’s take a closer look, or as close as we can.  The cameras never showed the trainers working with Tuitt on the sideline, but thanks to Rich Walsh of KDKA, we have a video of Stephon welcoming his teammates into the locker room after their win over the Browns.  If you look at Tuitt’s left arm after he turns to his right side in the hallway, you can see that his bicep muscle looks normal and isn’t displaced proximally or distally.  Yeah, his arm is hanging at his side, but he isn’t wearing a brace or a sling.  In addition to that, one of the beat reporters commented that Tuitt was seen leaving the locker room holding his duffel bag with his left hand that day.  All of those factors suggest a lesser injury rather than one that would land a player on IR.

In addition to that, we have examples of NFL players, particularly defensive tackles and linebackers, that were able to return to play fairly soon after sustaining a biceps injury:

Not all players can work through a biceps injury, of course.

I know that Tomlin didn’t rule Tuitt out for the upcoming game against the Vikings, and with the performance of the Vikings offense on Monday night, the Steelers clearly need all hands on deck.  Obviously, his participation in practice will be the determining factor.  I still don’t think Tuitt will play this week.  Even if the tear is partial, it is better to allow the tissue to heal a bit before stressing it, particularly in a young player with a brand-new 5-year contract.

My guess is that we will see him back for week 3 against the Bears.  Either way, there is no doubt that Stephon Tuitt and the Pittsburgh Steelers dodged a bullet and are lucky that the injury wasn’t as bad as some NFL insiders predicted.