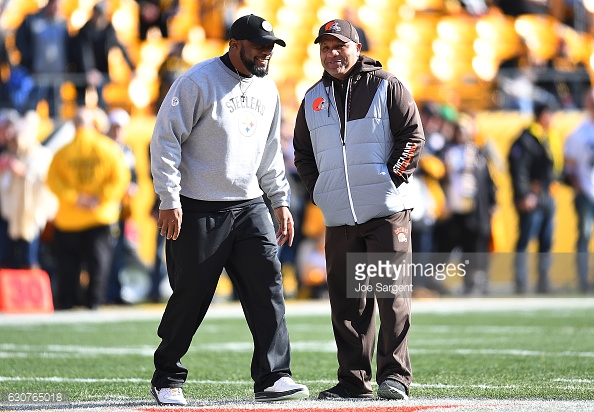 The first game is always a difficult one to gameplan for. Combine that with a rookie quarterback who wasn’t anointed as *the* guy from the get-go and it’s that much tougher. So it’s smart for the Pittsburgh Steelers to gameplan for Hue Jackson rather than DeShone Kizer. That’s a mantra that’s been repeated by the coaching staff throughout the week.

But Kizer is the most talented quarterback they’ve faced on the McCarron/Kessler/RG3’s of the world. What he lacks in experience he makes up for with his arm and ability to keep the play alive, something Keith Butler noted in talking to the media yesterday afternoon.

“Quarterback does have a good arm,” Butler told reporters. “He is fairly accurate for the most part. He’s got some decent scrambling ability. So we gotta play good defense.”

Like Tomlin, Butler said they’ll lean on the gameplans Jackson has shown in the past.

“I think you prepare for the head coach. Because the head coach has been there. And he’s going to be calling the plays he thinks he rookie quarterback can be successful on. We gotta be ready for the things he’s done in the past. I don’t think he’s going to cut the menu in half.”

For Jackson, that could mean a wide variety of things. Few coordinators in the league throw as much at defenses before the snap of the ball. If you watched the Pitt Panthers’ offense last year, or LSU beat the ever-loving snot out of BYU this past weekend, Jackson has the same idea of pre-snap chaos. His passing attack is vertical and looks for the home run, able to swing momentum and get chunk plays to minimize a rookie QB who probably can’t sustain 12 play drives all game.

That makes a typically underwhelming offense a real threat this weekend.