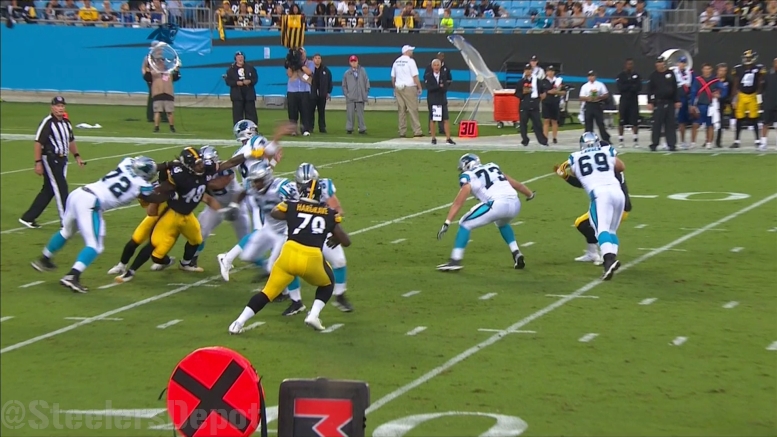 While it was unfortunate to see Pittsburgh Steelers rookie outside linebacker T.J. Watt have to bow out of his second career game with a groin injury, the extent of its severity not yet known, it was a pleasant sight to see their third-year starter, Bud Dupree, back out on the field today and making a mark.

Initial analysis indicates that the former first-round pick played the majority of the game after he sat out the season opener with a shoulder injury. I did notice Arthur Moats in the game briefly, but I do not believe that he saw many snaps, as was the case a week ago.

Officially, Dupree was credited with two tackles. He also recorded a sack and a pass defensed. Late in the first quarter, his pressure on third down helped to force an incomplete pass and an eventual punt.

I think we all know the narrative on the Kentucky product by now. This is meant to be his breakout season after he was forced to miss the majority of his second year while recovering from groin surgery, spending most of the year on injured reserve. He did record four and a half sacks in the handful of games after his return.

With the injury setback, Dupree was hoping to hit the ground running, but a shoulder injury that he suffered during training camp has proven to be a lingering issue. He said last week that he went for a second opinion on the shoulder prior to the season opener that indicated it was more significant than they initially thought, which likely led to him sitting out the game.

But I saw no indications that the shoulder was giving him any problems during the game today, which is an important first step. Now it all depends on how he feels after the game. It is worth reminding that he spent most of training camp and the preseason coming in and out of the lineup.

With Watt also now nicked with a groin injury, it is all the more imperative that the Steelers have Dupree out there, though even if both of them end up limited, they do still have Anthony Chickillo, who has performed well to date, and they have hardly even taken James Harrison out of the bubble wrap yet. He was their primary starter down the stretch last season.

So far through two games, the Steelers have already generated five sacks from their outside linebackers, with Watt and Chickillo both getting two last week and Dupree adding his to the total earlier today. That is more than the Steelers as a team had through like the first five weeks a year ago.

The pressure so far has been an improvement in comparison to last season. Although they only had two sacks today, they had a few others that very nearly were, and at least forced the quarterback to throw the ball away with no chance of success.