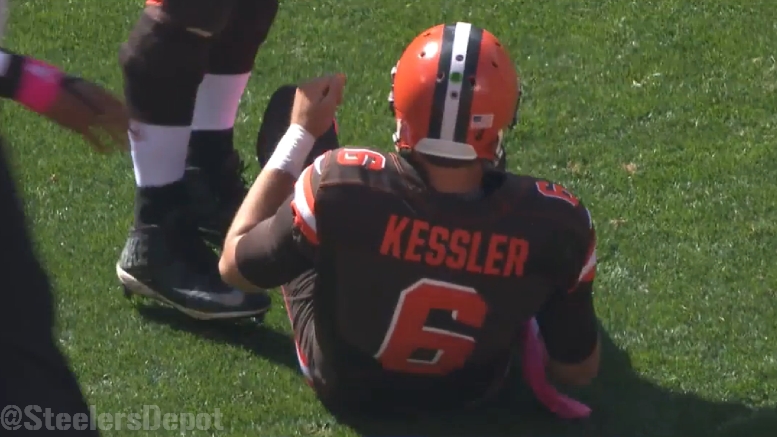 You probably don’t see this very often, but the Cleveland Browns are literally entering the 2017 season with a group of quarterbacks that have never won a game in their professional careers. Now, to be fair, of their three quarterbacks, one is a rookie and the other two are second-year players, only one of which has started a game before.

But regardless of that fact, this is a decision that they actively made, because they also had Brock Osweiler on the roster and they chose to release him, in doing so gaining incredibly little for it. Osweiler ended up signing a one-year veteran-minimum deal with the Broncos, and the Browns will still be responsible for paying him over $15 million this year to sit on Denver’s bench.

Currently, the team actually has four quarterbacks on their roster after they claimed first-year player Josh Woodrum off of waivers from the Ravens. The Browns have the top waiver claim, so they ended up netting a total of five players to their roster.

Of course, he hasn’t won a game, either. Nor has Kevin Hogan, who will likely see his way out the door soon now that Woodrum was added to the roster, although they did not release him immediately to make room for the new quarterback.

Nor has, of course, rookie starter DeShone Kizer, who will be looking to win the first game he ever plays IN LESS THAN A WEEK BY THE WAY against the Steelers in Cleveland.

Nor has Cody Kessler, the second-year quarterback that many believed would be the opening-day starter before the team opted to go with Kizer, behind whom they seem to be throwing their full support for the long haul.

Kessler started eight games last season, including one against the Steelers, and went 0-8. In nine total games played, he completed 128 of 195 passes for 1380 yards, throwing six touchdowns to two interceptions. He was sacked 21 times, and suffered two concussions, knocked out of games in three separate occasions.

So the next game Kizer wins will be the first for any quarterback on the roster. the Browns went 1-15 last season while starting three different quarterbacks and seeing six total players—including Terrell Pryor—throw passes as quarterbacks. The one victory came in Week 16 with Robert Griffin III under center.

The Steelers’ defense used to be notorious for stifling rookie quarterbacks, but while they beat Kessler a year ago, they did lose to Carson Wentz and Dak Prescott. Wentz was a second-overall pick, while Prescott beat pretty much everybody but the Giants.

Come Sunday, however, the two sides will also be facing off with swapped personnel. The Steelers traded wide receiver Sammie Coates to the Browns after they signed cornerback Joe Haden. It was possible that the two would have been covering each other in the game anyway, but if it happens now, they will be doing so in the opposite jersey colors.