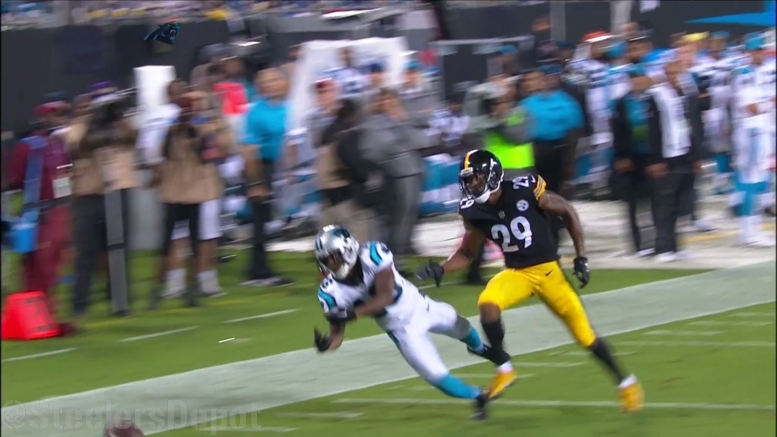 According to Adam Schefter, the ESPN insider was told by at least one front office source that he expects to see a record number of waiver claims being made this year, perhaps something that will become a more common practice going forward. Which makes me all the more glad that the Pittsburgh Steelers chose to hang on to rookie fifth-round pick Brian Allen.

I don’t think that the point needs to be explicated much because his background is known by those who follow this website. He was playing wide receiver three years ago and remains raw at the position, but he has impressive physical attributes, standing at 6’3” and around 220 pounds, that could make him an attractive target for other teams.

I do think that there is a possibility that he could play some on defense this year, though that is a broader topic for another day. This season, as a rookie, I would expect him to contribute on special teams, and the role I would imagine he will yield is as a jammer on the punt return unit, something that he did a lot of during the preseason.

But at a certain level I’m just relieved to see an abatement of the terrible cycle the Steelers have had with mid- to late-round cornerback draft selections over the course of the past half-decade or so, and even other aspects of their recent history of drafting the position are not so pretty. See Golson, Senquez.

But this area in particular has been quite dire in recent years. Currently, he is slated to be the first cornerback drafted beyond the third round to be on the 53-man roster at the start of the regular season since Cortez Allen in 2011, a player to whom he bares certain similarities—except a major one, which is health.

But let’s work backwards. In 2015, the Steelers used a fourth-round draft pick on Doran Grant. He made the initial 53-man roster but was released the next day to make room for other players. He spent most of the season on the practice squad, though he was eventually called up. He failed to make the roster the following year and is not on a team.

Going back to 2012, there was seventh-rounder Terrence Frederick. He has surprisingly been the most successful of the group, spending some time on the rosters of the Giants and Saints from 2012 to 2014, and is now playing in the CFL.

You can go back to 2010 with Crezdon Butler. He stuck around for one year, barely even playing on special teams, though he did play a bit for other teams in later years. In 2009, Joe Burnett, a fifth-round pick (as was Butler) was forced into playing time he wasn’t ready for and struggled. Because of his playing time, he was ineligible for the practice squad the next year. He ended up in the CFL after that.

Here’s to hoping that Allen becomes just the second late-round cornerback success story of the Mike Tomlin era, with the first being William Gay, a 2007 fifth-round draft pick, who is still playing.