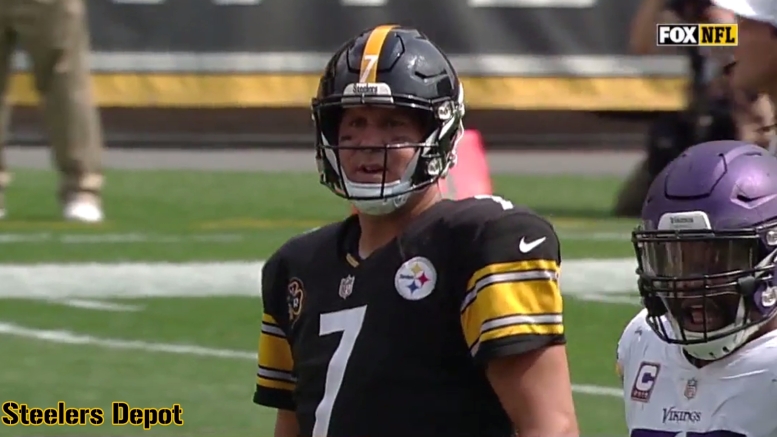 The Pittsburgh Steelers offense has had its share problems so far this season as not only has the running game struggled in the team’s first three games, but the passing game as well. While there’s a lot of ways you can probably describe the passing game woes the Steelers offense has had so far this season, the recent assessment by Sam Quinn of 247 Sports is way off the mark.

Quinn stated in a Wednesday post that the Steelers offense is dinking and dunking far too often. He tries to back up his reasoning for that by merely pointing to the 6.7 yards per attempt average of quarterback Ben Roethlisberger and that’s certainly lazy analysis.

In case you haven’t noticed it by now, NFL.com has their Next Gen Stats available to the public and if you like analytics, you’re sure to be entertained by them. As part of their passing game stats, they include Average Completed Air Yards (CAY), Average Intended Air Yards (IAY) and Average Air Yards Differential (AYD) for all quarterbacks and below are the descriptions of all three of those categories:

If you look at Roethlisberger’s stats in those three categories you can probably get a good idea of what’s going on with his pass attempts so far this season when it comes to distances.

We also chart passing distances of every Steelers game so I wanted to see how close our numbers come to those of Next Gen Stats. Below, I have all of Roethlisberger stats in those three categories that we have charted and as a disclaimer, I have included not only No Plays, but passes into the end zone distances as well. I have also included median numbers for the extreme stat geeks.

As you can see, our charting numbers, while not an exact match, are very much in line with those from Next Gen Stats.

When looking at these numbers, it’s clear that while Roethlisberger is not dinking and dunking, he’s having a problem completing his longer throws down the field. In fact, of his 46 total passes (38.7%) that have flown 10 yards or more past the original line of scrimmage, Roethlisberger has completed 17 (37.0%) of them. And of his 27 total throws of more than 15 yards past the line of scrimmage, only 7 (25.9%) have been completed. It’s worth noting, however, that 3 of those incompleted deep throws resulted in defensive pass interference penalties.

Being as I really like that stat, I decided to break Roethlisberger’s distance numbers down by receiving target for you to see.

In a few recent interviews since the Steelers Week 3 loss to the Chicago Bears, Roethlisberger admitted that not only is he probably locking in a little too much on Brown, he also said he needs to a better job of taking what opposing defenses give him underneath moving forward. In short, a little more dinking and dunking in the passing game is probably what the Steelers offense needs and I suspect we’ll see that in Sunday’s road game against the Baltimore Ravens.

Roethlisberger will still take his deep shots when the opportunities present themselves and hopefully he won’t have to face the high percentage of third down and longs that he’s already faced in the Steelers first three games of the season.

I will update these numbers in a few more weeks and this post will give us a good starting point to compare to.