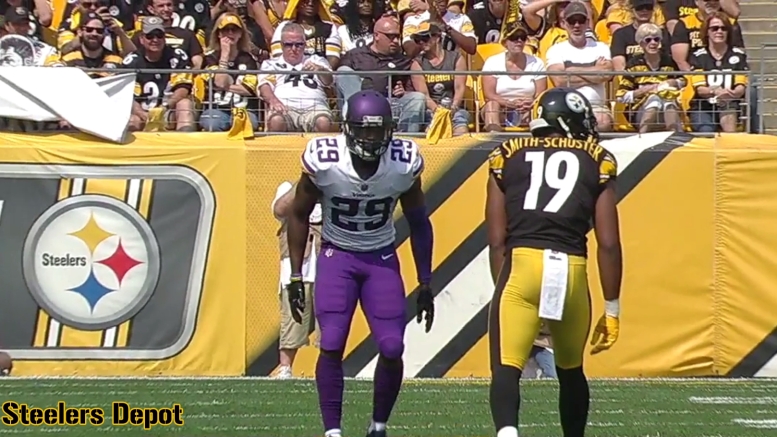 One of the popular topics along our comments section the past two weeks has seemingly been the workload for Pittsburgh Steelers rookie wide receiver JuJu Smith-Schuster. The second-round pick, who is the youngest player on any team’s 53-man roster at just 20 years old, has played over 65 snaps over the course of the first two weeks of the season.

Many figured that he would be riding the bench in the early portions of the season, as other wide receivers drafted before him—Markus Wheaton, Martavis Bryant, Sammie Coates—have done, but instead, the highest-drafted wide receiver since 2008 has been a steady presence on offense, and quarterback Ben Roethlisberger is fully on board with it.

During his weekly radio spot on 93.7 The Fan, the Steelers’ slinger talked about how Smith-Schuster has been performing for the offense during the first two games. While he did not see a target in the season opener, he caught three of four passes on Sunday for 16 yards, including a four-yard touchdown on a shovel pass.

“Coach asks me, ‘hey, are we doing too much, let me know if it seems like he’s a little confused, if he’s not processing things as fast’, and I don’t see any of it. I think that he’s processing it. It doesn’t seem like he’s overwhelmed. It’s not too much stuff”.

While he said that he was “super happy for him for grabbing his first touchdown”, however, he conceded that he was not about to get involved in the skill position players’ group celebration antics, rolling dice—and neither is David DeCastro.

Roethlisberger told the host that after Smith-Schuster scored his touchdown, DeCastro attempted to go over to him to celebrate, but the youngster was already gathering his teammates, in this instance Martavis Bryant and Le’Veon Bell, to get in on the act. DeCastro basically shrugged and jogged away, though Ramon Foster did partake. Roethlisberger called it one of the funniest things he’s ever seen.

I think the key to what the quarterback said, however, is the fact that the Steelers are using him in many different situations, which is something that I plan to take a look at during a film period later this week, because they have lined him up as a literal tight end and even in the backfield.

That is certainly putting a lot on the plate of such a young player, and admittedly he has already drawn two holding penalties and garnered a false start, but Roethlisberger is happy to work with him, and has previously talked about his ability to create mismatched in the four-receiver sets gives the offense an advantage that they wouldn’t have with another player in that role.