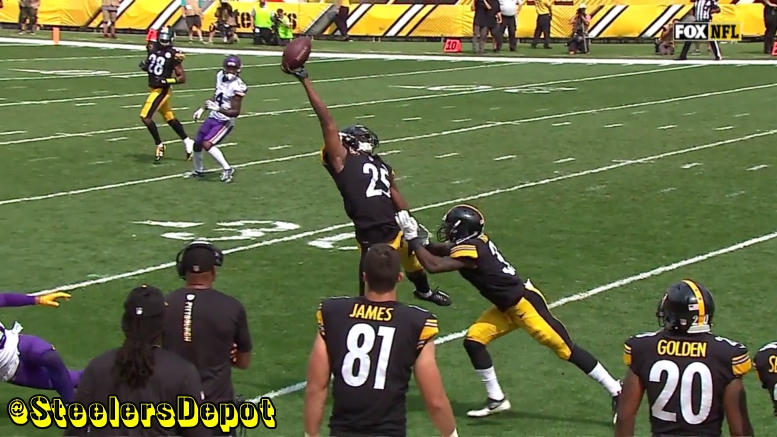 I don’t want to jinx it, but in my opinion, Pittsburgh Steelers second-year cornerback Artie Burns is really having himself a nice start to his second season. More than a year after he had a lot of people pulling their hair out after his name was called after “the Pittsburgh Steelers select…” during the 2017 NFL Draft in the first round, he is looking like the smart pick.

And I fully admit that I was certainly among those who had a lot of doubts about him and worried that the pick might just be a bust. He was an underclassman who even at that level was not a full-time starter, but more concerning to me is that he had a very obvious lack of physicality.

Well, that seems to be pretty much gone now. I have seen little to no issues with him from a physicality standpoint so far this year, and I think that shows. In truth, he really should have been a subject for a film room session from me this week, but I had so many other things that I wanted to get to that it just ended up not happening.

He has so far recorded three tackles in each game, all of them coming against the pass, but on only two of those six tackles did the play net a first down. In fact, he has two tackles for a yard’s gain or fewer, the other one even going for a loss of a yard.

This was the highly impressive tackle on Sunday that he made against Vikings running back Dalvin Cook, on which he not only quickly recognized and diagnosed the screen pass, he reacted to it very quickly and was able to evade a would-be blocking wide receiver to get behind the line of scrimmage to make a tackle.

On Sunday, he also recovered the game-clinching fumble forced by William Gay and defended a deep passing target. Spending a lot of time going up against the 6’3” Adam Thielen on Sunday, he was also forced to show his ability to play physical in coverage.

Because the Steelers do have him spending some more time in man coverage, he more often has his back to the ball, so he has not been as active in the run game as one might expect for a Steelers cornerback to be, but I see no reason that he couldn’t contribute in that area.

Compared to where he was around this time last year—or even at the end of last season—he is really looking like a different player when it comes to strength, physicality, aggressiveness, and recognition. That’s what comes with a year of experience and sessions in the weight room. He said he wanted to improve his strength, and that’s what he did.