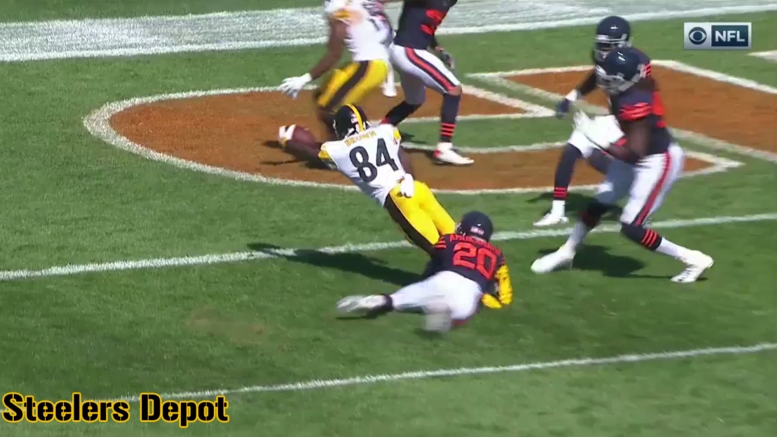 Not a whole lot as gone right or consistently well so far this year for the Pittsburgh Steelers—pretty much nothing outside of Antonio Brown. So it’s a good thing they gave him all that money in the offseason, because I don’t want to know what this team—not even just the offense—would look without him right now.

The eighth-year wide receiver turned in another big game on Sunday, coming up with 10 receptions for 110 yards and his first touchdown of the season. That is his second game with 10 or more receptions, and his second 100-yard game, during the first three games of the season.

His 354 total yards through three games leads the league, and nobody else is particularly close. The nearest is the Vikings’ Adam Thielen with 299, and his teammate, Stefon Diggs, is not far behind him with 293 receiving yards. Julio Jones, T.Y. Hilton, and Brandin Cooks are the only other wide receivers within 100 yards of him.

His 26 receptions are also the most in the league through three games, with only seven other players even reaching 20 receptions yet. The nearest is the Cardinals’ Larry Fitzgerald with 22, and he literally got more than half of them last night in a 13-reception showing.

Only Thielen has more than Brown’s five explosive receiving plays so far this season, though he is just one of six who have five, one behind the leader. His 18 first downs also pace the league, with the nearest players having 14.

He’s just awfully good. And awfully timely. Two of his 10 receptions on Sunday converted on third down, and a third target that fell incomplete did so only because of a defensive hold against him, which gave the offense a third down anyway. His only official incompletion on third down—and one of just four incompletions his way on the day, the others all on deep targets—came on a pass on which Ben Roethlisberger was unable to put enough air under the pass, broken up and nearly intercepted by a defender.

Carnell Lake talked about it during training camp. Todd Haley has talked about it in the early stages of the season. It’s really not impossible that the guy is actually getting better still, in spite of the fact that he has already put up some of the best receiving seasons in the history of the game, and certainly of the franchise.

Unfortunately, until some elements around him improve, mature, or whatever is needed of them, the Steelers will be dependent upon his excellence, which is why he sees to many targets per game—not that they’re not justified.

But it can certainly be maintained that Roethlisberger fixes on him too often, and that has been an issue at times. Sometimes it works out, like the triple-coverage pass he came down with that essentially clinched a win in the season opener. Maybe it isn’t such a bad idea after all…I mean, when you’re that good…