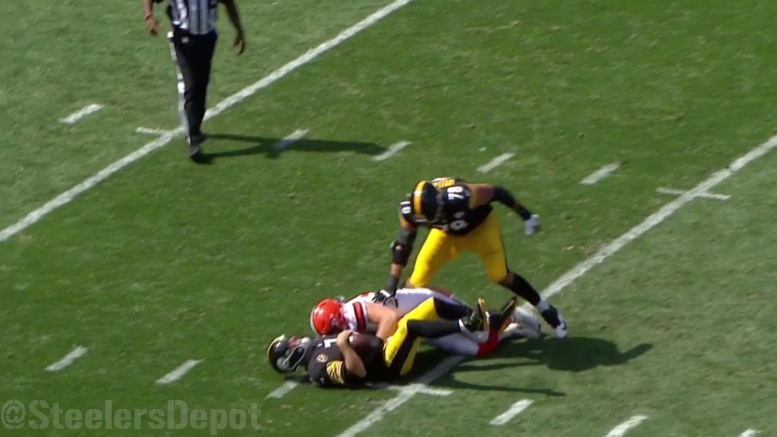 Question: Are you concerned with the way that left tackle Alejandro Villanueva has performed so far this year?

By the time the Steelers finished up the regular season, and pushed into the playoffs, I think that many would agree that Alejandro Villanueva was performing at a high level, perhaps among the best at his position at that time.

That is not how the season started off for him. In fact, he had a rough first couple of games and struggled through the first month and a half or so before really starting to settle down on the opposite side of the bye week.

If you go back even to the preseason, I think it would be fair to say that Villanueva has not picked up where he left off at the end of last year. While I wouldn’t go so far as to say that he has played poorly—there are others whose opinions I respect who would, mind you—it is clear that he is not playing his best right now.

According to Pro Football Focus, Marcus Gilbert is one of only three tackles so far who have not given up a single pressure through two games. Meanwhile, Villanueva ranks 46th in pass blocking efficiency, credited by them with giving up two sacks, one hit, and four additional hurries. Six of his total pressures allowed were credited to Sunday’s game. Reportedly, he had been sick during the week.

Even if we do declare that he has been struggling, however, that doesn’t necessarily mean that it is cause for concern. We saw just last season how he was able to improve throughout the season and play at a very high level.

His play right now is not preventing them from winning, and we have seen him play better than he currently is. But I don’t think there is really much of a debate around the fact that he needs to start doing a better job, and soon.