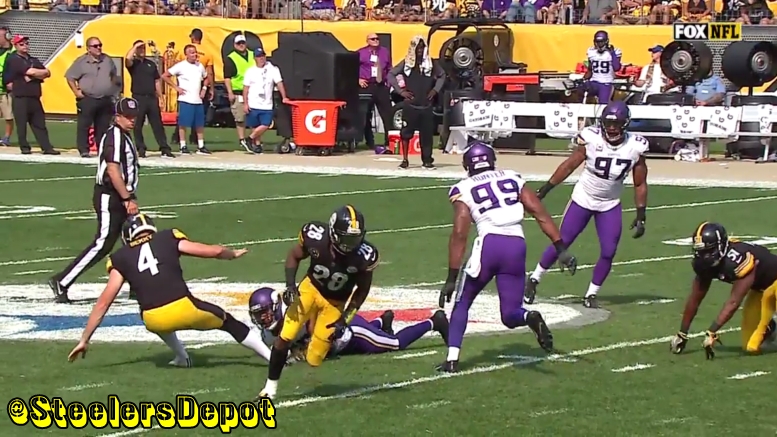 Question: Would you have accepted the running into the kicker penalty in yesterday’s game and attempted a 46-yard field goal, or would you have done as Mike Tomlin did and take the punt downed at the one-yard line?

This question requires some explication for those who did not get an opportunity to actually watch yesterday’s game for whatever reason.

Early in the fourth quarter, with about 10 minutes left to play in the game, the Steelers were lined up, prepared to attempt a 46-yard field goal on fourth and two after initially showing that they would run an offensive play, only for the field goal unit to commit a false start. They then sent the punting unit out, passing up a 51-yard attempt.

On the ensuing punt, Jordan Berry Aussie-kicked a beautiful ball that was downed at the one-yard line, but the Vikings were also flagged for running into the kicker, a five-yard penalty that would have put them back in the same position as they were when they were prepared to attempt the field goal.

The score was at the time 20-9, the Steelers holding an 11-point lead. Rather than attempt to add points, Tomlin chose to stick with what happened on the field, pinning the Vikings back at their one-yard line. They manage to gain one first down via pass interference, but ultimately punted from their own 18-yard line and the Steelers scored a field goal on their next possession.

So if you were the head coach, what would your decision have been there? On the one hand, you were already prepared to attempt the field goal before from the same distance, so it would make no sense for him to not be willing again.

On the other hand, he had a choice between one option that was a certainty and one that wasn’t. He could opt for the field goal and end up missing, giving the Vikings good field position. Or he could take the sure thing and give them terrible field position. He chose the latter. Personally, I don’t think there was a ‘wrong’ decision here.