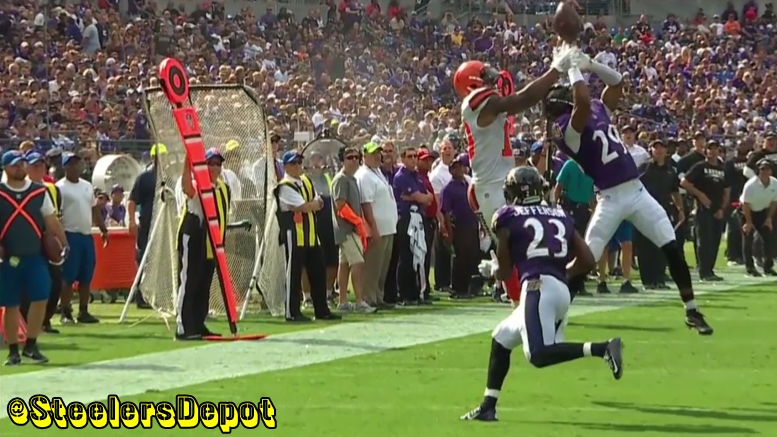 The Baltimore Ravens had allowed 10 points through two games this year. They have taken the ball away as many times. I think that most teams would trade every point allowed for a turnover. But they are still not happy with the way that their defensive unit has played as a whole to date, and honestly, there is a good reason for it.

Aside from the mere fact that they have played some pretty bad offenses that don’t offer much in the way of a challenge, they have also allowed those bad offenses to make some plays against them. On Sunday, against the Browns, despite having to use two different quarterbacks, they still combined for 300 passing yards, including seven explosive plays through the air.

“We are not happy about the performance that we had”, safety Eric Weddle told Jamison Hensley of ESPN. “We let those mistakes creep in, and if we don’t fix them, it’s going to hurt us down the road”.

What the Ravens need to be concerned about is their reliance on getting the turnover, because far more often than not, they do not prove to be sustainable. Perhaps the last Super Bowl defense that was truly able to sustain a takeaway presence despite a generally mediocre defense overall was the 2009 Saints.

Of course, maybe they don’t have to worry about that just yet, because up next on their schedule is Blake Bortles in London. The former first-round quarterback has thrown 53 interceptions in 48 games, with 11 returned for touchdowns. That is just two behind Ben Roethlisberger, who has played a decade longer.

Still, even Joe Flacco knows that it’s not sustainable. “The team gets down there and you’re like, ‘all right, they could still turn the ball over’, you start to think that. It’s not going to last forever, I don’t think. But, man, just tip your hat to them the way they’re doing things”.

So far, the Ravens have ended 43 percent of their opponents’ drives with a turnover, many of them coming inside the red zone, or at least inside of their own territory. But two games is such a miniscule sample size that it’s really hard to say anything meaningful about their ability to continue to produce at anything resembling this level.

DeShone Kizer, the Browns’ rookie quarterback playing in his second game, spent the afternoon battling a migraine and even had to come out of the game because of it. The other starting quarterback that they faced, Andy Dalton, is already being talked about as a potential for being benched. His offensive coordinator has already been fired two games into the season.

After Bortles, the Ravens will have to deal with the Pittsburgh Steelers, who have done some good things on offense, but are admittedly still ramping things up. That matchup should be a good test for both teams, particularly Pittsburgh’s offense and the Ravens’ defense.