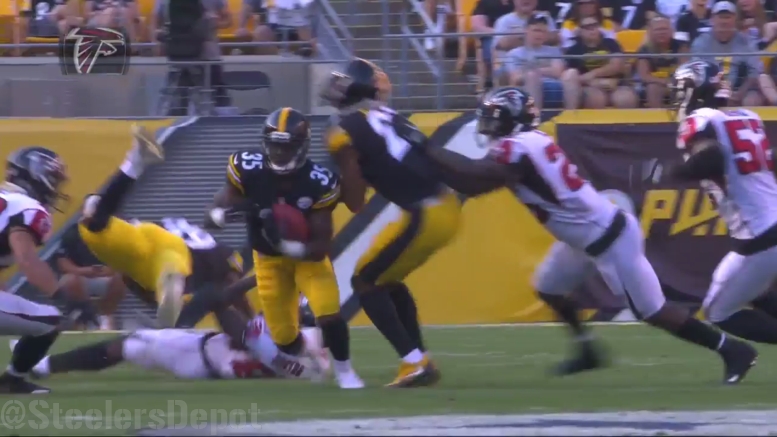 If you were not familiar with Trey Williams before yesterday’s game, you are not to blame. The Pittsburgh Steelers’ second-year running back had hardly even gotten work in team drills during training camp, and did not play in their team’s first preseason game. Terrell Watson got the load, and all the fanfare.

But after last evening’s game, the door suddenly creaks open for the 5’7” running back—the door that leads to a half-million-dollar paycheck. With a 64-yard punt return for a touchdown, the first punt return touchdown in the preseason for the Steelers in eight years, Williams now has everybody’s attention, and attention leads to opportunity.

It’s not entirely clear why he was getting little to no work most often during training camp in team drills—perhaps he was nursing a minor injury—but with the spotlight now on him, and already having shown the potential to perform, it would not be surprising if he is given more work and a chance to prove himself.

Over the course of the past month, the field for the third running back on the roster has continued to expand. Heading into training camp, it was largely assumed that Knile Davis, the free agent signing, would seize it. Then the veteran Fitzgerald Toussaint showed that he would not go down without a fight.

And then Watson happened in the second half of the first preseason game. I don’t believe the big back even got any work in this one, however. Williams himself did not get any carries on offense—I don’t believe he played any offensive snaps off the top of my head from what I recall seeing—but his work in the return game can lead to more work elsewhere.

In all, Williams returned three punts for 75 yards, a 25-yard average, and he also showed good judgement, calling for a fair catch on a fourth punt and allowing another to go over his head for a touchback. On his first return attempt, he aggressively fielded it in order to advance the ball seven yards in traffic rather than calling for the fair catch.

But there is still a steep hill for him to climb. Now that he is on the radar, he needs to showcase his abilities. Optimally, he will be given opportunities also to participate in the kick return game, which is something that he did in college, returning 70 kicks for a 24.1-yard average over three years at Texas A&M.

He said after the game that there was no way he was going to let the punter bring him down once he reached the left sideline on his return. “Everybody would have just clowned me” had he allowed that to happen, according to Jeremy Fowler.

If he hopes to carve out a roster spot, there can be no clowning around. But first he needs the opportunities in-game to perform. Most of that will probably come in the fourth preseason game. But he could at least be given a chance to return some kicks.