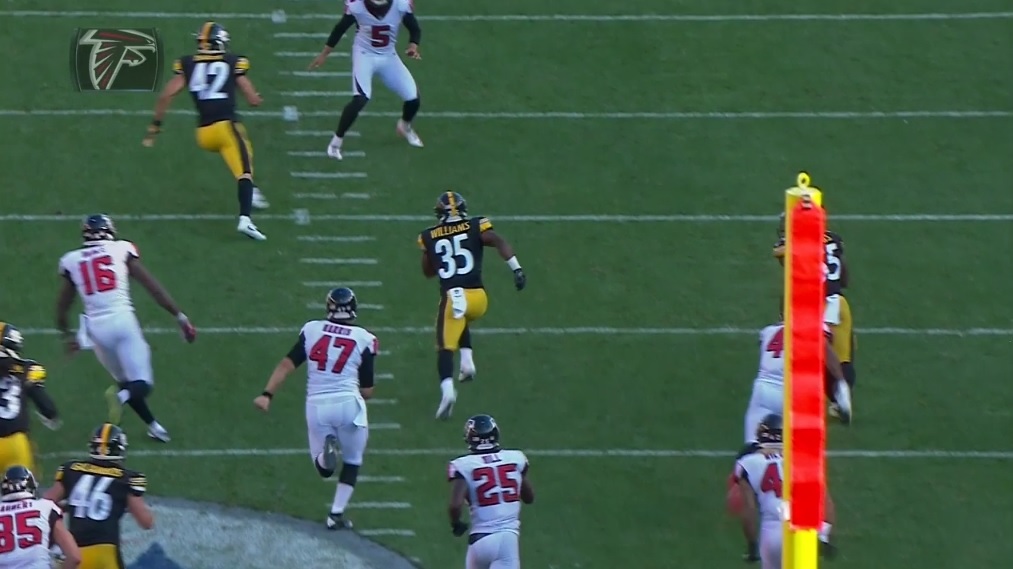 Trey Williams is small by NFL standards. But his portfolio is large and he added to it Sunday afternoon.

The talk of the game, Williams scored the Pittsburgh Steelers first touchdown in a 17-13 win over the Atlanta Falcons, running back a punt 64 yards late in the third quarter. A look at it for those who didn’t watch the game or just want to rewind the tape.

Matthew Marczi is going to expand on Williams’ future with the team going forward in an article tomorrow. But it’s fair to say he at least caught the team’s attention after a quiet camp, one hindered by a hamstring injury.

It isn’t just the glitz of a loud punt return that made an impression on the coaching staff. Asked about Williams following the game, Mike Tomlin steered the discussion to the nuances of Williams’ game he did well.

“You’re talking about adding to your portfolio,” Tomlin said post game. “What you’re capable of doing. This is a guy learning to catch punts. Forget what he did once he had the ball. I thought he had good judgment and decision making and fielding the ball today. For a guy with very little experience in that area.”

Williams, a high-prized but little used recruit from Texas A&M, never returned a punt in college. His focus was kickoffs, finding moderate success over his career, averaging 24 yards a pop. But in the NFL, in Pittsburgh at least, the preference is to have kick returners who offer size and more toughness. Williams was forced to try his hand in the punt game.

Special teams is more than just making big plays. It’s about being in position to do so. Making smart decisions and getting square and under the football, both traits on display on Williams’ touchdown. And while most guys would be eager to do it again, Williams let the next punt travel into the end zone for a touchback, a smart, selfless decision. Those areas of his game will help him as much as what he did on his 64 yard scoot.

And for now, be the talk of Pittsburgh.