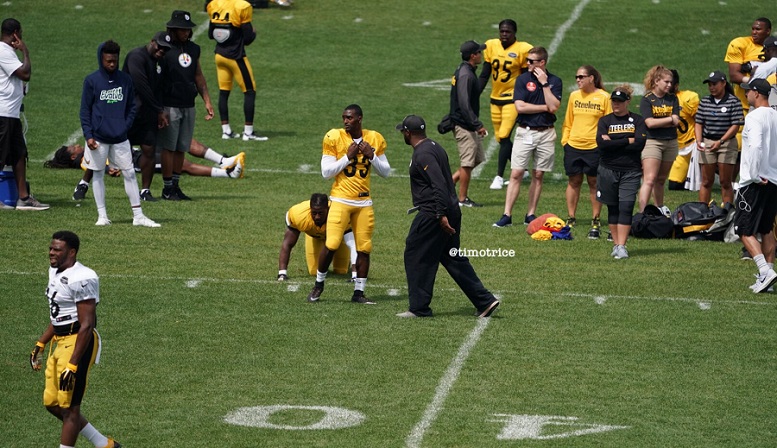 Injuries forced the Pittsburgh Steelers to sign free agent cornerback JaCorey Shepherd on Saturday and while he’ll certainly be needed during practices at that position, he does have the ability to return kickoffs as well.

After Saturday’s practice concluded at Sant Vincent College in Latrobe, Steelers head coach Mike Tomlin was asked if he might look at Shepherd as a kick returner moving forward.

“I’m just getting to know him first and foremost,” Tomlin said of Shepherd. “I’m sure that may be part of the evaluation, but we got to get his feet on the ground here in Latrobe.”

During his college career at Kansas, Shepherd returned 63 kickoffs for 1,350 yards. Last season as a member of the San Francisco 49ers, he returned 21 kickoffs for 456 yards with a long of 41. Last November, Shepherd, who was originally drafted in the sixth-round of the 2015 NFL Draft by the Philadelphia Eagles, gave a long interview to the 49ers media and he talked quite a bit about his skills returning kicks.

Last season, the Steelers didn’t have much success when it came to kickoff returns as they averaged just 21.4 yards on 28 total returns from five different players. Earlier this offseason, the Steelers signed veteran running back Knile Davis with the hope being that he might be able to return kickoffs in 2017 being as he’s had some success in that phase since entering the NFL.

Shepherd’s arrival in Pittsburgh, while late, still happened before the start of the preseason. If the current injured cornerbacks ahead of him on the depth chart are all able to overcome their individual ailments, he’s obviously going to have a very hard time avoiding the final round of cuts if manages to stick around the remainder of the offseason. With that said, Shepherd should be able to get some playing time on tape during the preseason not only as a cornerback, but potentially as a kick returner as well to help strengthen his pro resume should he ultimately wind up out of a job again.

Who knows, perhaps Shepherd will ultimately land on the Steelers practice squad come the start of the regular season.