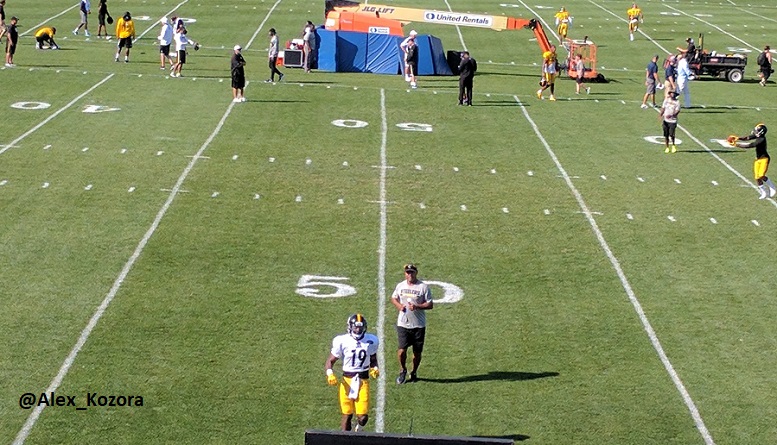 Former Pittsburgh Steelers wide receiver Hines Ward was present for the team’s Wednesday training camp practice at Saint Vincent College and he was spotted several times throughout the day talking to rookie wide receiver JuJu Smith-Schuster, who has been compared to him quite a bit ever since he was selected in the second-round of this year’s draft.

“I was asking him about what he did to get to this level and how he was able to be one of the greatest guys to come through this organization,” Smith-Schuster said about his time with Ward on Wednesday, according to Gerry Dulac of the Pittsburgh Post-Gazette. “It’s super valuable. You take a guy like that, you keep picking at his ear and his brain — what can I do? He tells us great information.

“It’s more motivation for me to come out here knowing Hines Ward is out here and knowing we’re doing blocking, which is what he’s known for, you kind of put it on the line.”

With several notable Steelers alumni currently helping the team out during training camp either as visitors or coaching interns, head coach Mike Tomlin talked after practice about how that’s so pleasing to see.

“It’s an awesome thing we have going on with some of our alumni and our players and I’m fortunate to have been here long enough that I’ve coached some of those guys,” Tomlin said. “Whether it’s Hines or Ike [Taylor] or Charlie Batch or Kendall Simmons or Alan Faneca, we embrace the tradition that is Steeler football. And it’s just great to see oral history be shared from older to younger and the teachings. It’s just really one of the interesting things about having been here. It’s fun to watch those relationships develop.”

Ike Taylor is helping out this year as a scouting intern while Alan Faneca and Kendall Simmons are both coaching interns this summer. As for Ward, it’s unclear as to how long he’ll be around Latrobe moving forward.

Tomlin was then asked if he thinks some of the younger players are aware of the accomplishments of the alumni currently helping out the team during training camp.