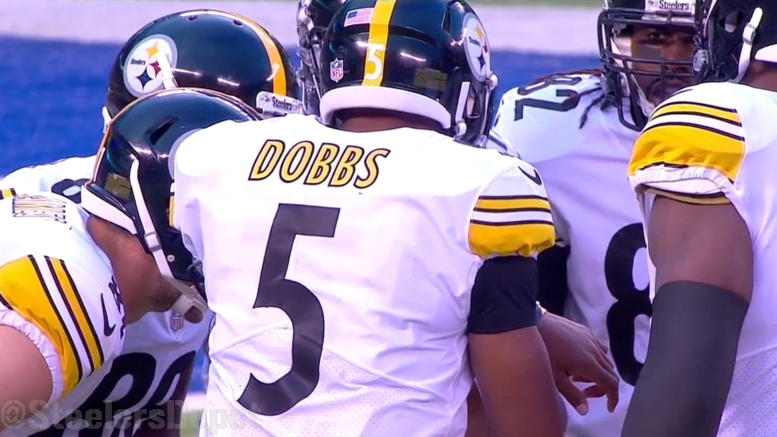 It is all but inevitable at this point that the Pittsburgh Steelers are entering a period of transition at the quarterback position. It’s quite possible that within two years, the only quarterback currently remaining on the roster who will still be here is the one that is listed as third on the depth chart.

While starting quarterback Ben Roethlisberger still has three years remaining on his current contract, he has already hammered home a number of times that he is not committing himself to any more than one season at a time, so it certainly cannot be counted upon that he will still be playing in 2019.

As for his backup, Landry Jones, it seems apparent that the Steelers do not necessarily view him as the long-term answer there, re-signing him this offseason to a two-year contract, presumably to serve as a bridge before their rookie, Joshua Dobbs, is able to assume that role.

Could that transition come as early as this year? I would not be one to put my money on that happening. But with training camp breaking yesterday, Head Coach Mike Tomlin was asked to address that question, and he said that “the door has never been closed” for Dobbs, and anybody else, to move up and take somebody else’s job.

While that is somewhat of a rote response, I think it should go without saying that it doesn’t really matter to Dobbs what Tomlin says. His goal will inevitably be to play as well as he possibly can and ascend up the depth chart as far and as quickly as his abilities take him.

Given Roethlisberger’s age, and the wear and tear that comes with it, he has naturally been given his fair share of time off, either sitting out entire practices or not partaking in specific drills on a given afternoon. That has benefitted all of the younger quarterbacks to take more or higher-quality reps.

But one man’s misfortune is another man’s opportunity, and Jones’ abdominal injury has provided Dobbs with just that. The fifth-year quarterback has missed quite a bit of training camp and will most likely miss his second straight preseason game.

It has already been announced that he will start tomorrow against the Falcons, as he did last week against the Giants. While he struggled, particularly against New York’s first-team defense, there were some signs of progress.

With the first-game jitters out of the way, he could have a real opportunity to present himself tomorrow as a legitimate option as the number two this year. As I said earlier, this is not something that I personally expect to happen, but, as Tomlin said, “the door has never been closed”. Many are hoping that he trots right through it.