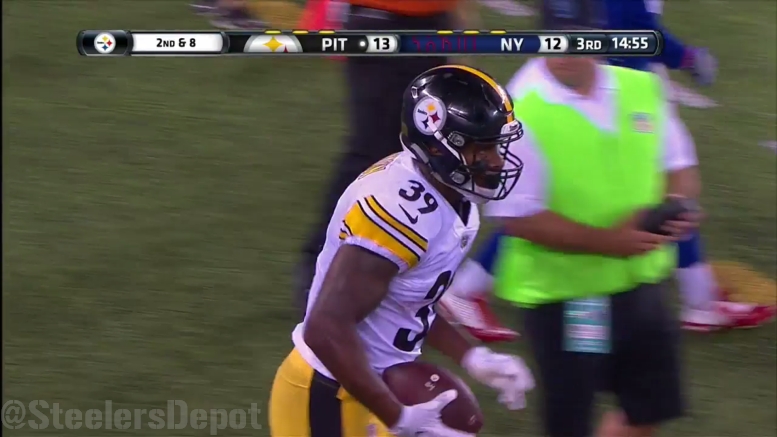 The Pittsburgh Steelers obviously did not have their full arsenal in terms of their running game last night. Not only were they absent running backs Le’Veon Bell, their All-Pro, and James Conner, the third-round rookie draft pick, but they also did not have starting offensive linemen Alejandro Villanueva and Maurkice Pouncey, the latter a perennial member of the AFC Pro Bowl roster.

Granted, the Giants did not field their full arsenal either, but even their depth is an imposing challenge, as they had among the best run defenses in the league last season. Yet the Steelers’ rushing depth held up well against their front seven. And a lot of the credit for that goes to first-year runner Terrell Watson.

Watson, out of Azusa Pacific, was one of three running backs who got the ball for Pittsburgh last night, and he also did the most with his opportunities, though they all did fairly well.

Between Watson, Fitzgerald Toussaint, and Knile Davis, the Steelers ran the ball 24 times and gained 97 yards for their efforts, which comes in just a hair above four yards per carry. That is not bad, especially if you add in a nine-yard wide receiver end-around and a 16-yard quarterback scramble to the mix.

The Steelers wanted to get a good look at Watson though, and they got one toward the end of the game, beginning with the final drive of the third quarter that bled into the fourth.

On the nine-play possession, Watson accounted for five rushes, accounting for 27 yards. He had two runs of just two yards and another that was stopped for no gain, but he also added gains of eight yards and 15 yards, the latter of which produced a rushing touchdown.

His sixth attempt of the night came on a delayed draw play on third and 10 that was simply an attempt to make something out of nothing, and his final three carries produced a total of nine yards during an end-of-game scenario attempting to run out the clock, which is what he accomplished, but in between those he ripped off another seven-yard run.

The 240-pound back, whom head coach Mike Tomlin has named “Nightmare” in honor of Christain Okoye, The Nigerian Nightmare whose records Watson broke at Azusa Pacific, has been getting a lot of attention at training camp lately, highlighted by a three-carry sequence during a recent goal line drill on which he scored all three times to give the offense an improbable come-from-behind ‘victory’.

Since then he has effectively thrown his hat into the ring. At the very least, he figures to have a prime shot at making the practice squad, but one can’t help but wonder if he could legitimately vie with Toussaint and Davis for the third running back position on the 53-man roster. In order to do so, however, he will have to show something as the up back on kick returns.