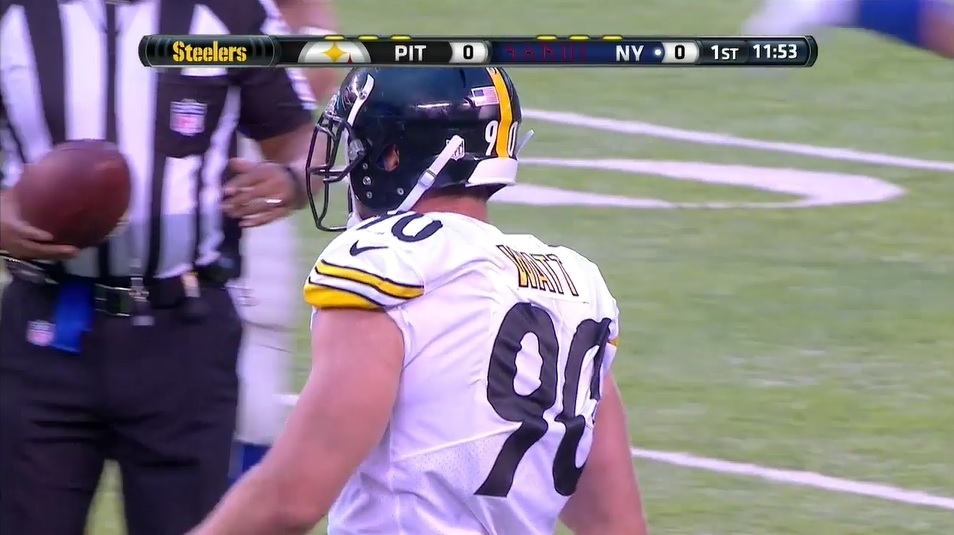 For some rookies, the first NFL game is a deer in the headlights moment. A new scheme, playbook, the speed of the game. It’s a lot to take in. For T.J. Watt, it’s hard to tell if this was his first game or 100th.

After the win, one in which Watt notched two sacks on his first two pass rushes, he said he felt comfortable on the field. Whether that was playing the heavy amount of snaps he did, 63 on defense alone, flipping both linebacker spots, or seeing time on special teams.

“I’m never going to turn down reps,” Watt said via Steelers.com, asking about his snap count.

It was mostly a result of the team having only three active linebackers, Watt included. Bud Dupree, Anthony Chickillo, and Keion Adams all sat out with injury. That left the Steelers with just Watt, Arthur Moats, and Farrington Huguenin.

Watt said his experience in college, playing both outside linebacker spots and getting work on special teams made last night easier and him more confident.

“I felt like I belong here. I came into this game with a certain amount of confidence because of the work I put in…I came in here like it was a job. Like I came into every college game. I came in here expecting to do my job and put on display what I’ve been working on. I feel like I did that.”

The box score, even realizing both his sacks weren’t a 10 on the difficulty scale, would agree. We have Watt charted down for 4.5 pressures, two sacks, and a pass deflection. He averaged a pressure once every 7.1 rushes. That’s just one game, and partially against backups, but to compare, James Harrison had the best pressure rate last year, averaging one every 14.5 tries.

“This is where I’m supposed to be,” Watt said. “I believe I was born to play football. That’s why I went out there and did what I did.”

Watt will have bad days ahead. It’s only natural. But he appears to have the poise, confidence, and work ethic to overcome them.