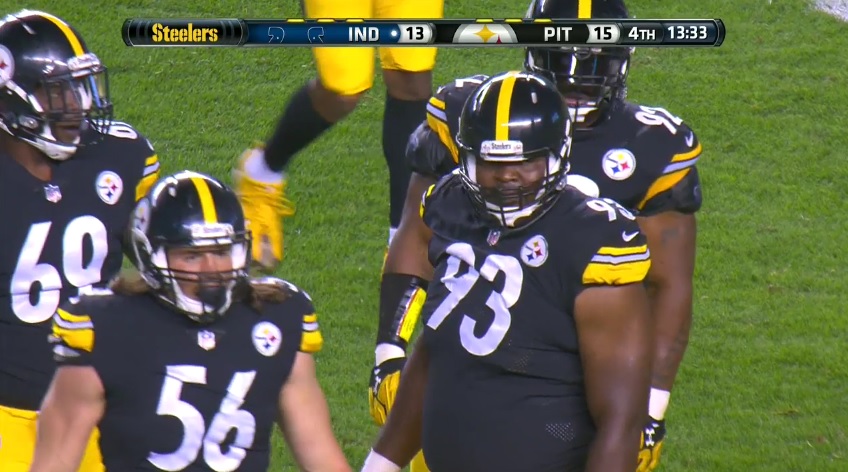 For the first time this preseason, Pittsburgh Steelers fans had the chance to see Ben Roethlisberger, Antonio Brown and James Harrison suit up for a game. However, not much changed on either side of the ball when it came to performances by the offensive and defensive units Saturday night in a 19-15 loss to the visiting Indianapolis Colts, dropping the Steelers to 2-1 in the preseason.

In what will become a staple of postgame pieces here at Steelers Depot, I’ll take a shot at grading each position’s performance from the previous game.

Roethlisberger had a couple of shaky throws during his two series’ with the starting unit, but overall the veteran was sharp and helped direct a group that had four plays go for double-digit yardage against the Colts.

Roethlisberger did complete 6-of-9 passes for 73 yards in the loss, but he had a costly fumble on a clean sack by Indianapolis’ John Simon, who came untouched off the edge on Roethlisberger’s blind side.

Outside of the veteran QB, Landry Jones was hit or miss in his first preseason action, throwing for 163 yards, one touchdown and one interception, but the interception proved costly as the backup quarterback was picked in the end zone. Jones also seemed too comfortable to just hit the short passes Saturday night and never really opened up the offense except for two deep shots that fell incomplete.

Rookie Josh Dobbs wasn’t much better, throwing for 24 yards on seven attempts while taking a sack. The rookie signal caller was able to keep the final play alive to heave up a prayer, but overall quarterback play was just “meh.”

The guy has been one of the hardest workers throughout camp, often being the first player onto the field, and throughout the preseason he’s run extremely hard, fighting for every blade of grass in hopes of making the 53-man roster.

Veteran backup Knile Davis looked good to start the game running the ball, but his final stat line shows just 21 yards on seven carries. Not great, and that’s not going to give him an edge over Fitzgerald Toussaint, even if Fitz is hurt.

Rookie James Conner showed flashes again as a ball carrier, racking up 26 yards on four carries, including a long of 11 on his first carry, but the show belonged to Watson in the second half as the undrafted rookie ran for 40 yards on eight carries and added 42 receiving yards on four catches, including an impressive 22-yard catch-and-run off of a screen pass that he nearly busted wide open to take to the house.

The starting group of Brown, Martavis Bryant and Eli Rogers looked solid with Roethlisberger throwing them the ball, but once Big Ben and Brown left the game, Bryant and Rogers struggled to produce.

Brown did finish with two catches for 28 yards in limited action, both of which were nice catch-and-runs through the Indianapolis defense, but it was nothing to write home about.

Rogers seemed to have a field day in the middle of the Colts’ defense, carving out 58 yards on five catches on just six targets, but with Bryant the Steelers continue to only try and get him the ball on screens to let him run after the catch.

Granted, he did have a deep shot from Jones late in the game, but for a guy with his size and his speed, it’s strange that they’re only letting him operate around the line of scrimmage right now.

Outside of the Steelers’ pass-catching trio, rookie JuJu Smith-Schuster came up with a solid game before being hurt, hauling in three passes for 31 yards to flash some glimpses of brilliance, but guys like Cobi Hamilton and Darrius Heyward-Bey struggled to leave much of a mark as pass catchers, hauling in one pass each for a combined 13 yards.

Roethlisberger sure does look for Jesse James a lot, huh?

The big tight end had three targets on the first two drives, but the Penn State product was only able to haul in one pass for 12 yards in the middle of the field.

Xavier Grimble made a strong case for making the 53-man roster at just the right time, hauling in all three targets for 26 yards, including an impressive 10-yard touchdown in which he hauled in the ball over a Colts defender for the score, showcasing his strong hands.

If he can just figure it out on a consistent basis, the Steelers would have an underrated move TE to work with.

Twice in the first half the Colts were able to get to Steelers quarterbacks for unabated sacks as Roethlisberger was stripped on the first possession, while Jones was sacked in his own end of the field as Indianapolis timed blitzes perfectly off the blindside.

In the running game, Pittsburgh struggled to open up holes in the middle consistently, forcing backs to bounce to the outside for their big runs. I haven’t really seen the push from the starting group that I’ve been accustomed to. Maybe they’re saving their best play for the regular season, but I can’t help but be slightly concerned with what I’m seeing from guys like David DeCastro, Alejandro Villanueva and Marcus Gilbert, to name a few.

The backups weren’t any better either as Jones and Dobbs had to scramble out of the pocket a few times each to try and keep plays alive, while Jones had trouble stepping into some deep throws because of the push up the middle from the Colts.

For the most part, the Steelers’ defensive line had a strong game, led by Stephon Tuitt, who had a tackle for loss and a quarterback hit in the loss, but overall the group was very quiet.

Cam Heyward finished with two tackles but didn’t pop off the screen during the game, and Javon Hargrave didn’t register a single stat in limited action.

Daniel McCullers flashed once on tape, driving the Colts’ center into the quarterbacks lap, but once again the big nose tackle couldn’t disengage quickly enough for the sack.

Lavon Hooks had two stops for the Steelers in the second half as he makes a push to try and catch onto the practice squad, while Roy Philon had another strong game, registering three tackles for the Steelers.

Despite being relatively quiet, the Steelers’ defensive line played a part in holding the Colts to just 2.9 yards per career. That’s a win in my book.

Ryan Shazier came up with a beautiful interception in the second quarter for the Steelers, jumping a route in the left flat, but the standout linebacker missed a couple of tackles in the game and seemed hesitant to attack the line of scrimmage at times.

Vince Williams had a really good game for the Steelers, leading the way with 8 stops, including half a sack, a tackle for loss and one quarterback hit, but the new starting inside linebacker gave up a few completions in coverage as quarterbacks seem to target 98 when he’s in the middle of the field.

Tyler Matakevich missed a tackle on the Colts’ final touchdown, but overall Dirty Red was solid. He’s solidified his spot as the No. 3 ILB on this roster.

What I was most impressed with from the linebacker group was the pass rush, which put heat on Indianapolis quarterbacks all game long. Unfortunately, no outside linebacker recorded a sack Saturday night. Sometimes that’s just how it goes.

Bud Dupree beat the Colts’ right tackle a couple of times with speed moves, while James Harrison used his power moves to win the edge a few times.

TJ Watt continues to show flashes, while Anthony Chickillo plays with his hair on fire at all times.

This group isn’t flashy yet, but it’s solid.

The absence of Mike Mitchell is glaring with this group right now.

Ross Cockrell continues to be a turnstile on the outside, while Artie Burns is struggling to get back up to speed after a strong start to camp covering Antonio Brown every day.

This group missed a handful of tackles on first watch, including a big missed tackle combination on Indianapolis’ first drive by Burns and Robert Golden that led to a huge 55-yard catch-and-run by Donte Moncrief, which led to a Frank Gore touchdown.

Mike Hilton continues to impress and has likely earned a spot on the 53-man roster, while rookie Cam Sutton balled out on Saturday night in his first game action, recording three stops, including a tackle for a loss and a pass deflection.

Jordan Dangerfield, Jacob Hagen and Malik Golden also had good games for the Steelers, while Brian Allen stepped up his game with a roster spot no the line, turning in three stops of his own.

There’s no doubt though that a shakeup at the position is coming, considering the Steelers have been gashed by backup quarterbacks the last two weeks.

It wouldn’t shock me if Cockrell is released and the Steelers take a look at someone like Kyle Fuller from Chicago, should he be released as expected.

Chris Boswell did hit three field goals on the night, but a missed extra point proved costly, as the Steelers were forced to try for a touchdown on the last drive instead of a field goal.

Punting wasn’t much better as Jordan Berry had a few mishits on his attempts, but the biggest disappointment continues to be Davis in the return game.

The veteran running back was signed to fill that hole, and he’s just not broken the big one like most of us have been waiting for. Not asking for a touchdown, but just show us something.

Trey Williams struggled to get anything going on punt returns, finishing with 10 yards on three returns, but watching the game it felt like that was due more to great punting from the Colts and poor blocking from the Steelers.