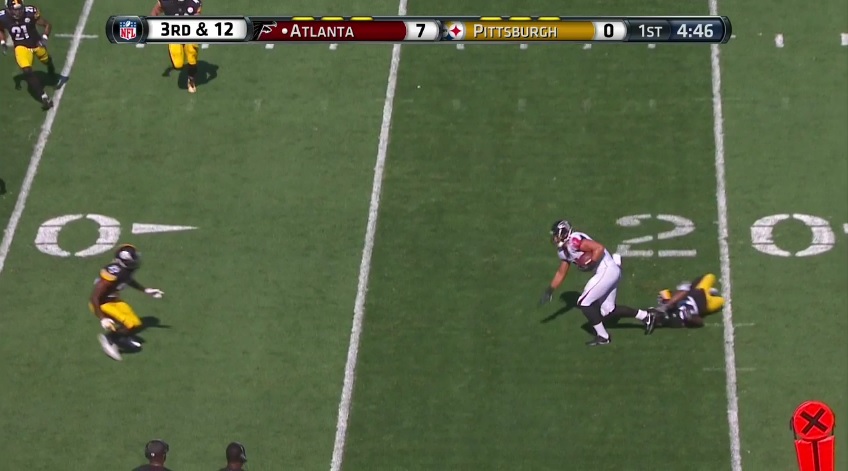 Last week against the New York Giants, the Steelers’ defense missed just eight tackles. This week against the Atlanta Falcons, that number dropped by two as the defensive unit appears to be much more sound tackling the ball carrier, at least early on.

Despite some coverage struggles on Sunday, tackling — namely physicality — was impressive.

As I said above, that tackling throughout the game by the Steelers was rather impressive. I saw a lot of technically sound stops, as well as some thunderous stops by Sean Davis, Robert Golden, Jordan Dangerfield and Steven Johnson.

It’s really nice to see the younger defenders bring that type of physicality, especially from the secondary considering Mike Mitchell is still on the mend.

The one egregious play where multiple Steelers missed tackles came on Falcons’ tight end Austin Hooper’s catch-and-run at the 4:51 mark of the first quarter.

The short dump-off to Hooper shouldn’t have gone for more than 5 yards, but veteran corner William Gay comes into the fray out of control and whiffs on the tackle attempt, allowing Hooper to continue to plod down the field.

From there, Artie Burns isn’t able to bring down Hooper due to failure to properly wrap up around the waist before the big Atlanta tight end is finally brought down by TJ Watt and Sean Davis.

It’s never a good thing to see two-thirds of your top three corners missing tackles in the open field, but that’s what preseason is for right now:  to work out the kinks.

Later in the game, following Chris Boswell’s 42-yard field goal, the Steelers kick the ball off to the Falcons, who has veteran receiver Andre Roberts back deep to field the kick.

After receiving the kick just outside of his own end zone, Roberts is able to make second-year Pittsburgh safety Jacob Hagen miss wildly as the Liberty product goes diving at ankles on a poor tackling attempt, which doesn’t show up well on film.

That tackling display is one way to not earn your way onto the team.

Overall, there wasn’t a ton of plays to show missed tackles on, that’s how solid the defensive units were on Sunday afternoon.

Again, it’s just preseason, but the tackling displays the Steelers have put on through two games is rather encouraging.