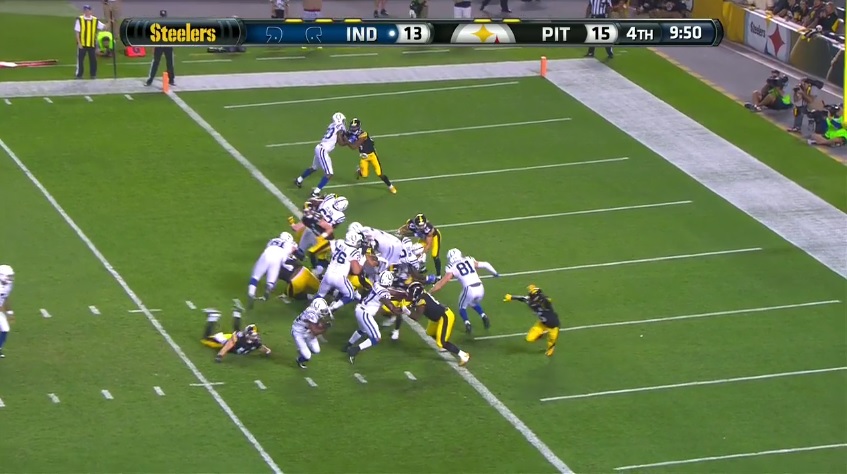 If you’ve kept up with us here at Steelers Depot throughout the preseason, I like to keep track of missed tackles in each game and file a report on some key misses, giving the readers a better understanding of who is or isn’t getting the job done in the most important aspect of defense in the NFL.

Against the visiting Indianapolis Colts Saturday night at Heinz Field, the Pittsburgh Steelers turned in their worst tackling performance of the preseason, resulting in a 19-15 loss on home turf to drop the Steelers to 2-1 on the preseason.

As you can see on paper, Saturday’s game against the Colts wasn’t a great performance for the Steelers from a tackling standpoint, and it started right away on the Colts’ first drive of the game.

On this pitch and catch from Scott Tolzein to Donte’ Moncrief, it’s a poor play by the Steelers’ secondary even before the missed tackles come into play.

Artie Burns gives up the middle of the field to Moncrief, who beats him cleanly inside for the catch. From there, it turns disastrous as Burns isn’t very physical in his tackle attempt, allowing Moncrief to stay on his feet before Robert Golden comes in for the tackle attempt.

Just look at Golden’s form though. That’s unacceptable. Golden isn’t physical enough to just a shoulder into somebody’s midsection and expect him to fall down. As Golden hits Moncrief, he causes Burns to slide off of the tackle as well, allowing Moncrief to race down the slideline for a 55-yard catch and run.

When does Mike Mitchell come back?

Burns had a rough night against the Colts, tying for the lead in missed tackles despite playing just under one half of football.

Later on in the first half, Burns got smoked to the corner by Colts rookie running back Marlon Mack.

Second-year linebacker Tyler Matakevich misses the initial tackle attempt on Mack after knifing through the line, but Burns gets caught flat-footed by the speedy back, leaving the Steelers corner grasping at air as Mack jets by.

Last season, Burns improved down the stretch when it came to supporting the run, but this is just a poor attempt by Burns in extended action. Hopefully this is just a preseason problem, but I haven’t been too thrilled with Burns’ effort in games.

Late in the game, with the Colts on the doorstep of a go-ahead touchdown, Steelers defensive coordinator Keith Butler sends a run blitz at the Colts, but third-year linebacker Anthony Chickillo whiffs in the hole and falls down on Josh Ferguson’s cut, leaving cornerback Brandon Dixon as the last line of defense.

You all know how that went.

When you get that much initial penetration, you have to either slow down the runner, or make the stop. Chickillo did neither and Dixon just simply botched the tackle attempt.

Overall, Saturday night wasn’t a good night for the Steelers defense. A lot of the same problems from early last season popped up again. With just one preseason game left on the schedule, a lot needs cleaned up on the defensive side of the ball if the Steelers are going to reach their team potential this fall.