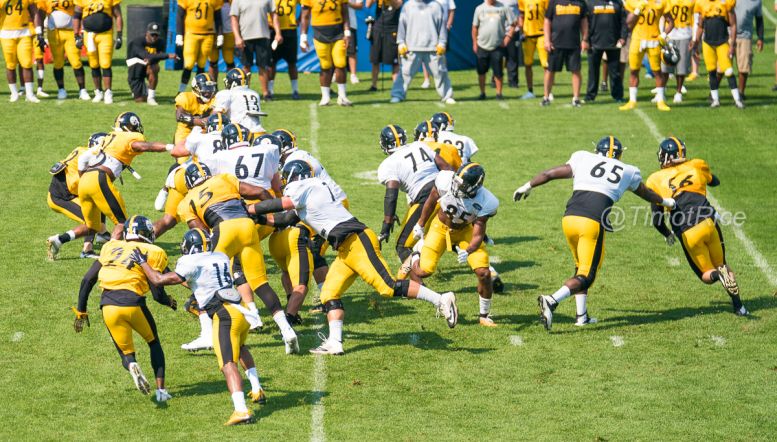 Welcome to Day Seven of training camp. The best day of camp. It’s Friday Night Lights for the Pittsburgh Steelers. Atmosphere is always electric. Players come in on six yellow school buses from St. Vincent College.An environment you’re not going to find anywhere else and a tradition as enduring as it is exciting. Here’s what I’m watching for.

– Will Landry Jones return? If not, Josh Dobbs will continue to soak up the reps. Something about this practice is different. A different time, at dusk, not midday, with the stadium lights putting all eyes on the players. There’s a different feel, intensity, tone set by the veterans. If there is a first test for someone like Dobbs, tonight is it.

This is where Roosevelt Nix first began to earn buzz in his first year with the team. Dominated in backs on ‘backers and wound up making the team by the end of things.

– Bart Houston…command the huddle. In my charting, which I know isn’t complete in this regard, I’ve logged three times in team sessions where the offense has had to completely walk back to the huddle and reset the play. It’s easily happened another three, bringing us to six, for a guy not getting a lot of reps. Maybe 50 total so far? Maybe? And that’s with your offensive coordinator holding your hand. Can only imagine what happens during a game. Needs to show improvement there. Step one.

– The return of James Conner? Man, how cool would that be? Went 5-2 in the first backs on ‘backers drill. If he’s out there, every defender is going to be gunning for him. And of course, we want to see more out of him as a runner. Only three or four carries he had in the only padded practice he’s been available for. Sample size is small.

– If Conner can’t go, Terrell Watson is a poor man’s version of Conner. Haven’t seen any special traits as a runner, though nothing terrible either, but he’s a well-rounded player with the ability to anchor and square up in pass protection. Chance to shine, again, similar to Nix.

– Trey Williams is another dude who has to pop. Has definitely shown some traits, burst, short-area quickness, but the Steelers generally go bigger on the practice squad. So Williams has to play that much better.

– You can Antonio Brown and Artie Burns will square off one-on-one. I might miss some of that action, it usually runs at the same time as backs on ‘backers, but you can bet you’ll hear about it.

– Will Justin Hunter ever have a bad day? At least, on paper, because there are still nuances of the game he’s working on. But his skillset is tough to slow down on a consistent basis, as Ross Cockrell has found out.

– Demarcus Ayers has had a fine camp…but when the position is this deep, you need something more than “fine.” Now is as good a time as any to ball out and have a great day. Especially now that JuJu Smith-Schuster is back, stealing reps, Martavis Bryant being able to return at a moment’s notice, and Sammie Coates working his way back.

– Xavier Grimble has been better, especially as a blocker, but I want to see him make plays vertically. Had more of an impact in the red zone the past few days but want to see him win elsewhere, too.

– I’ll give Phazahn Odom this much. He’s had the conditoning to finish out each practice. Inching his way towards progress and there’s not really anyone else to keep on the practice squad. It’s Odom versus the waiver wire right now.

– Jerald Hawkins and Anthony Chickillo should do battle all day. One of the fun matchups that gets overlooked.

– Does Alejandro Villanueva continue his dominance against T.J. Watt? You’d think that at least on one rep, Watt will figure Villy out. Hasn’t really happened yet. Which I don’t fault him for. Tough matchup for a rookie. 340 pounder who can move? Good freakin’ luck.

– I presume Cameron Heyward will be back. That will push Tyson Alualu back to second team after getting a few days with the 1’s and a guy like Lavon Hooks to third team. Dominio effect we don’t talk about. How those backup guys see their snaps greatly reduced. Hooks goes from second team, about as many snaps as the first group, to third team, which gets scraps. And then someone like Nelson Adams goes from third to 4th team…which is, pretty much nothing. Harsh reality.

Whenever the next roster move happens, and it’ll probably be soon (cornerback? getting thin), a defensive linemen is on the chopping block. Probably not Adams. But Christian Brown, Francis Kallon, you’re on the watch list. May have just one or two days to prove you’re worth keeping around.

– Alualu will go back to 2nd string, as I mentioned. With how well he performed against the one’s, he might dominate against the easier-by-comparison backups. Matt Feiler will have his hands full.

– Bud Dupree has been fine this camp. I don’t really have much to say. Like what he’s shown in coverage too. But I don’t feel like he has a strong counter move developed quite yet either; at least, if he does, I haven’t caught onto it. Speed rushes haven’t had much success against the athletic Marcus Gilbert.

– Keeping a close eye on Keion Adams, who has been stringing together a couple of solid practices. There is, of course, the benefit by playing against lesser competition. But hey, all you can do is win the matchups you’re faced with.

– More dominance for Tyler Matakevich? He’s been your best player in camp. And probably one of the least athletic, “football looking” dudes on the roster. Not like Hunter, who can run and leap with the best of them.

– Vince Williams got one day of hitting. And then had to pump the brakes yesterday. You know he is making up for lost time. David Johnson and Brandon Brown-Dukes were victims on Wednesday.

– I think Matt Galambos has been a little more impressive than Keith Kelsey, reading things a little quicker, but it’s close. Can one of them stand out tonight?

– While I am confident his injury is minor, we of course will keep tabs on Ryan Shazier’s status. If anything, to get Yinzer Nation to calm down.

– If the injury bug continues, and the team is down three cornerbacks (Senquez Golson, Cam Sutton, Greg Ducre), it’s a big opportunity for the younger guys to get reps they don’t normally see. Circle Brandon Dixon who is reaping those benefits.

– Brian Allen has had a difficult start. His path will still be made on special teams, where on paper, he thrives as a run and hit dude, but a good day with positive press across the board would be nice. Has to play with better technique at the catch point. Not look back and get out of phase at the top of the route and be more confident driving on the ball in off man.

– Talked about the top guys plenty, the ones making the 53. And Mike Mitchell is almost certain to be out tomorrow. So there’s Sean Davis, Robert Golden, and Jordan Dangerfield.

– But there is room on the practice squad for someone. Jacob Hagen is the clear leader but Terrish Webb and Malik Golden are gunning for them. Webb doesn’t look lost, I was really turned off by his Pitt tape, but neither he or Golden have done much.

– Wanted to throw this out just to have it on the record. Injuries and their return are impossible to know with any high degree of confidence. But…

– Sammie Coates back within a week (back by August 8th or 9th).

– Mike Mitchell, Cameron Sutton, and Senquez Golson a little farther out. Mitchell somewhere around the 13th or 14th and Sutton/Golson, the last couple practices.