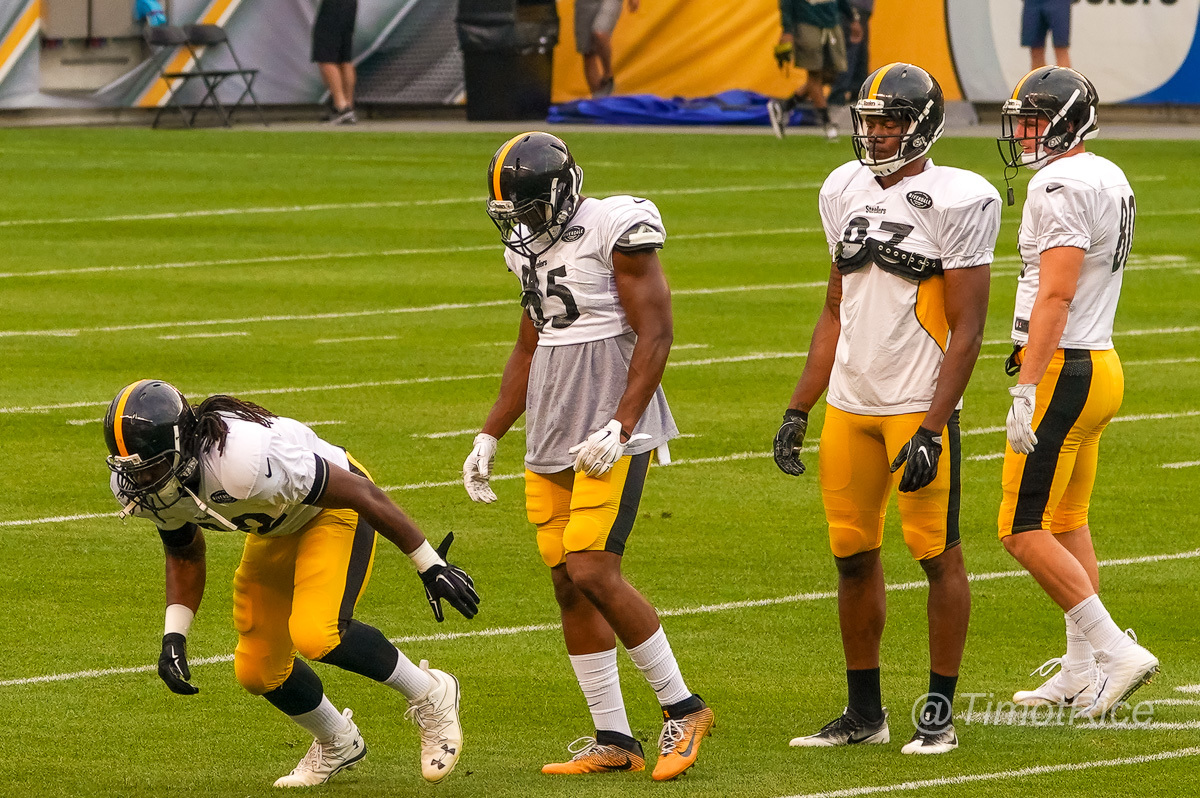 Now that the 2017 Pittsburgh Steelers training camp has concluded, we’re recapping everything that went down over these past 16 practices. We’ll break down each play, position-by-position, with final winners and losers at the end. Next up, tight end.

Jesse James: It wasn’t a terrible camp for The Outlaw. Let’s be clear about that. But a bit underwhelming. I didn’t care nor expect James to make a ton of plays vertically. Which is good because he didn’t. But I did expect him to show great hands and the ability to make tough catches in traffic. Moments like that existed but they were fleeting. Things got off to a rough start with Ben Roethlisberger having trouble connecting with him in the end zone. He didn’t have a touchdown his first four practices and dropped the ball twice.

Things got better throughout camp but there were still ugly moments. A perfectly thrown corner route that slipped through his hands. And a should’ve-been touchdown in seven shots in one of the last practices when Ross Cockrell somehow poked the ball out last second.

His run blocking against the New York Giants was underratedly good. And he will keep growing/developing. It just wasn’t the camp I was hoping for.

David Johnson: Gotta hand it to David Johnson. If you look at things in a vacuum, and only took this year’s camp into consideration, Johnson was the best tight end on the roster. His hands were above average and he almost always catches away from his frame. He was able to make some tough throws in coverage and while a lot of this came in one-on-ones, he showed nuance in his route running to separate and make up for the lack of speed he’s clearly never had. He can pull off double-moves and burst away at the top.

Blocking has never been a question. Always his strength. He is what he is, a glorified linemen, but if you throw the ball his way, he’ll make it count.

Xavier Grimble: Similar story to James. Not a terrible camp but a sense of frustration. He ducked out of an early practice with heat-related problems, an all-too common issue with him, and a surprising ailment who certainly looks in tremendous shape and worked hard during the offseason.

I’m trying to think of a highlight, “wow” play from him all of camp. Nothing is coming immediately to mind. That shouldn’t happen for an above average athlete like Grimble, who made a couple catches in seven shots (5 TDs by last count, most of the TEs), but never stretched the field. Most of those vertical shots fell incomplete, including one drop on a perfectly placed throw down the seam.

I think his roster spot is probably safe. And his blocking got better, looking much better with his technique on the sleds from this year to last. But we leave hoping for more.

Phazahn Odom: A good story, small school tryout kid who made the Steelers’ roster. But we told you before camp not to buy those Odom jerseys (someone didn’t get the message). His blocking? Yeesh, it’s hard to be much worse. His first couple times through the sleds were abysmal, unable to snap his hips on contact and finish driving with his lower half. While that got better throughout, he regressed terribly in game action against the Giants.

While Odom showed he can be quick to the tuck as a receiver and obviously has a large catch radius, too many passes were let into his body, causing double-catches and drops. His 6’7 height worked against him getting off the line of scrimmage, too tall to dip under jamming linebackers, to the point where the QB couldn’t even throw the ball on several one-on-one matchups.

He got destroyed in backs on ‘backers, going 0-7. T.J. Watt manhandled him all camp.

I’ll say this to his credit. Didn’t miss a practice, didn’t miss a rep, put in extra work before practice. For a rookie from Fordham, we’ve seen so many rookies tripped up by minor injury, he was available and soaking up as many reps as he could. That’s big.

There’s still upside here and you have to understand how unfinished of a product he was/is. Not saying he can’t get better, just as Grimble has done in his career. But there’s a long way to go.

Jake McGee: Brought in mid-way through camp after Scott Orndoff tweaked his hamstring and was waived/injured, he has been something of a pleasant surprise. His athleticism is woefully limited, on par with David Johnson, but he has good hands who can make tough catches in traffic, a trait the Steelers hold in high regard. You’re probably aware of his blocking too, given special mention by Mike Tomlin post-game, and something he did well throughout camp. Got reps at fullback late in camp, a good sign for his chances to stick around. More hats you can wear, the better. He also perked up on the coverage unit, too.

Choosing between McGee and Odom comes down to the traits you value and your philosophy on the practice squad’s purpose. They couldn’t be more different. If the Steelers choose to keep him, it’s well-deserved.