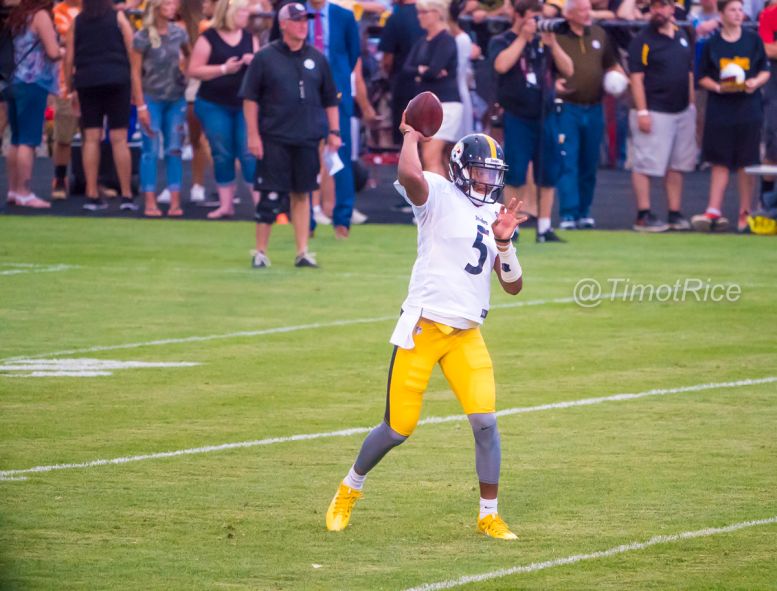 Now that the 2017 Pittsburgh Steelers training camp has concluded, we’re recapping everything that went down over these past 16 practices. We’ll break down each play, position-by-position, with final winners and losers at the end. Let’s start today with quarterback.

Ben Roethlisberger: As if he needs an introduction. Roethlisberger rested/was excused for three of the 16 practices, including yesterday’s light practice session. He was as good as ever, wowing with his deep ball and as you’d expect, being the best decision-maker of the lot. Only one interception the entire camp (though he’ll claim he didn’t turn it over). For whatever it’s worth, his touchdown numbers saw a major spike too over last year. A sign the team was better in the red zone/seven shots.

Though there are always people questioning his weight, and by extension his work ethic, he would regularly run along the side at camp when he wasn’t practicing or seeing a reduced workload. Even yesterday, donning a yellow T-Shirt and shorts, he ran behind the track (and VIP fans) several times.

Last thing on him. Maybe it’s me just paying attention to it more, or having more young guys than usual, but his communication was top notch. Several times each practice, mostly in one-on-one or on-air with his wide receivers, he would spent several moments with the receiver to go over the route. That was surely most beneficial for guys like Justin Hunter and JuJu Smith-Schuster but Antonio Brown wasn’t exempt from a briefing either. And you could tell he and Eli Rogers figured things out as camp went on. Leadership qualities.

Landry Jones: Not much to report. Suffered the abdominal strain a couple days in and though it seemed really minor at the time, it’s led to an extended absence. He should be back for the third preseason game at the rate he’s going and will have ample time in the fourth game to get some work in. Probably a quarter, if I had to guess.

When he did throw, I would describe him as “fine.” Nothing terrific, nothing terrible. Which has basically been his career arc.

Since he hasn’t practiced in two weeks, we do have final numbers on him.

Josh Dobbs: Despite a rocky start to the New York Giants game, I think you have to be happy with the job Dobbs has done throughout camp. Poise is good term to describe him. The basics, understanding and commanding the offense, were evident almost immediately. His first two practices saw struggles, picked once and should’ve been two more times, but he took off from there. Quicker learner from his mistakes.

Live arm with really good ball placement downfield. On anything vertical, it’s usually on the correct shoulder, only where the receiver has a chance to get it. His arm and torque allows him to make strong, accurate throws from different and difficult platforms. He’s capable of still ripping the ball in there off his back foot or rolling out to his left (as a right-handed QB).

As camp went on, he did a better job of going through his progressions and finding tertiary reads. And clearly, he has the mobility to extend plays and take off with the ball when he has to.

The volume of reps were unexpected too. Don’t have final tally yet but probably threw about 175 passes in camp. That’s likely to end up being more than Roethlisberger or any other QB on the team. When he goes back to riding the bench, he’ll have this high volume of plays to build off of.

There’s the little things too. Not many botched center/QB exchanges and I don’t think he severely screwed up a single handoff or toss.

Do want to see more accuracy on the short/intermediate stuff. His completion percentage, which, sure, isn’t the say-all, end-all, but it’s one of the lowest I’ve recorded since I’ve been at camp. Probably going to come in somewhere around 57%. So still some consistency in short areas, especially red zone, I want to see.

Bart Houston: Is he better than past 4th string QBs? Probably about the same. But he did get more reps, elevated to third team with Jones out and when Roethlisberger was out, to the #2. The numbers aren’t pretty, he threw by far the most picks on a relatively small number of attempts. He did show off his arm and occasionally, had some NFL-level throws (a corner route to Marcus Tucker still sticks out). To his credit, his command of the offense grew after a horrid start.

But his accuracy was terri-bad, both in practice and in game. So many throws, short and long, woefully sailed. Tucker probably hates his guts for the number of times he missed him, twice in the Giants (one would’ve been for a TD). His throwing style is a little wonky, his back foot flying off the ground and swinging around when pushing the ball downfield.

He’ll get time this week, probably another quarter, and maybe another in the final game. There’s obviously no path to the roster, even if someone went down, but there has been slight progression with him. You could do worse.