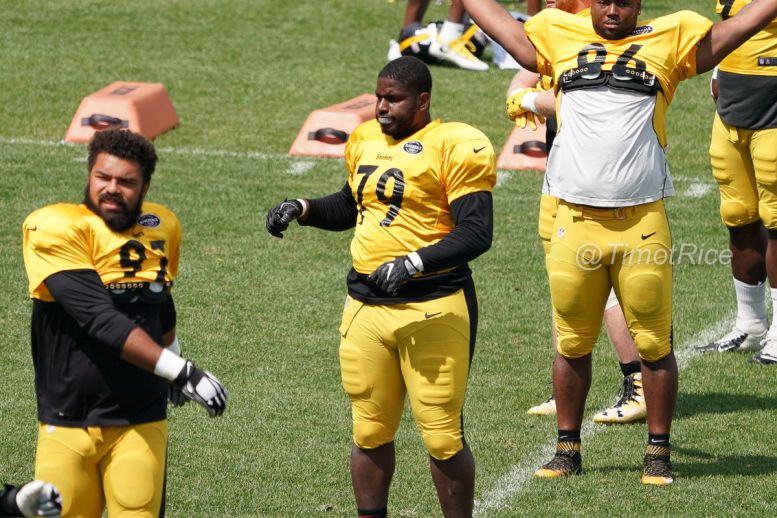 Now that the 2017 Pittsburgh Steelers training camp has concluded, we’re recapping everything that went down over these past 16 practices. We’ll break down each play, position-by-position, with final winners and losers at the end. We’re moving over to the defense and the defensive line.

Cam Heyward: Ho-hum for Heyward, who doesn’t need to be studied much during training camp. I do wish he would have a go-to finesse move, instead relying on his bull rush (which, to be fair, is very effective). He was strong against the run and his one-arm stab is one of his best weapons.

Stephon Tuitt: Similar story as to Heyward. Not much we need to know. Like I wrote for the offensive line, Tuitt and David DeCastro had great battles. Tuitt is much more finesse, better off swimming over you than powering through. It was another solid camp.

Javon Hargrave: Though Hargrave is only entering his second year, he feels like he’s in the same camp of Heyward and Tuitt. A guy you don’t need to learn much about, a guy who is steady, and near the top of his game. He absolutely dominated B.J. Finney in the run game, able to leverage him and walk him backwards several times. As a pass rusher, who also relies on power, with a powerful lower half to walk the center back. He didn’t miss a single rep or practice all of camp. A rock.

Tyson Alualu: You can see why Kevin Colbert eagerly brought him in. He had a great camp. Effective as a pass rusher and run blocker, his game starts with effort. Remember one play of him chasing Josh Dobbs across the field early in camp. That’s what John Mitchell requires, regardless of talent level. But he works off blocks in the run game, shows good hand usage as a pass rusher, and gave the Steelers’ second team line all kind of fits. Hard to find any negatives. Will be the top backup at both DE spots.

L.T. Walton: Initially, it was a surprise to see Walton kick to nose tackle. But it makes sense. He offers nothing as a pass rusher but is a plugger up the middle at nose. He’s shown the ability to stay on his feet and hold the point of attack and he becomes an average athlete at nose, instead of a below average one at end. We’ve seen him show the ability to walk centers back and flow on zone schemes, either widening the back or forcing the cutback. Solid, not spectacular, but that’s what his job description requires.

Johnny Maxey: A solid camp. Big thing for him was the chance to go through an entire offseason program to get bigger and stronger. I don’t know how much he weighs now, though I can promise it’s more than the 283 he’s listed, but his lower half looks a lot bigger. He came into camp knowing what to expect, as opposed to a total unknown for a school – Mars Hill – you’ve never heard of.

Thought he improved a tad as a pass rusher in OL/DL while being steady against the run. Best news for him was avoiding a right knee injury scare, only missing half a practice.

Daniel McCullers: Oh big Dan. We’ve all wanted him to take that next big step and find his game. It hasn’t happened and in Pittsburgh at least, will never happen. He’s about two weeks away from getting cut. Walton immediately jumped in as the second team nose tackle and McCullers never even made an attempt to push him. Just like last year when Hargrave dusted him.

Sure, his size will still collapse the pocket from time to time but it’s the same old story as Year One. Never even saw the spin move he teased before camp. It’s not an effort thing, it’s not an IQ thing. He just doesn’t have the nasty demeanor needed to play in the trenches.

McCullers is like that person you know who has a Beanie Babies collection. Incredibly soft, little return on a hyped up investment, and anyone who is still clinging onto hope is delusional.

Lavon Hooks: Hooks was mysteriously sidelined for the first four days of practice, valuable missed time to kick things off. He was able to practice after that. Inconsistent is a good way to describe his game. He will occasionally show power on his punch but too often is leaning on tackles and seemed to tire easily. He is versatile, able to play really anywhere along the line but mostly working at third team LDE. Not an awful camp but certainly nothing inspiring either that would put him in the driver’s seat for a practice squad spot.

Roy Philon: Good ‘ol Roy. He’s managed to stick around with the team time and time again. He made it through all of camp this year after suffering a season-ending injury in last year’s joint practice versus the Detroit Lions. Philon had his moments, stacking and shedding versus the run and being able to dip under uber-tall guys like Brian Mihalik as a pass rusher (Philon’s 6’2 height definitely helps). But he’s still undersized as a four tech and seemed to fade as camp went on. Worked third team RDE.

Francis Kallon: Kallon didn’t see many reps in practice. In fact, he may have gotten more work on Day 16 than the rest of camp combined. Those reps were generally uninspiring, though I thought he showed some hand usage and football IQ on the last day. But he is an impressive athlete, running down kicks at 295 pounds, and you knew he was a work in progress when he was signed. Not a lot of reps in college, late bloomer in high school.

Christian Brown: Brown, like Kallon, had the table scraps of snaps. He was the fourth string nose tackle, not a good phrase for someone who wants to see the field. Got a little better look of him in one-on-ones. Dropped his eye level too often and wound up on the ground, unable to carry his lower half. He’s one of the easiest cuts on the roster.