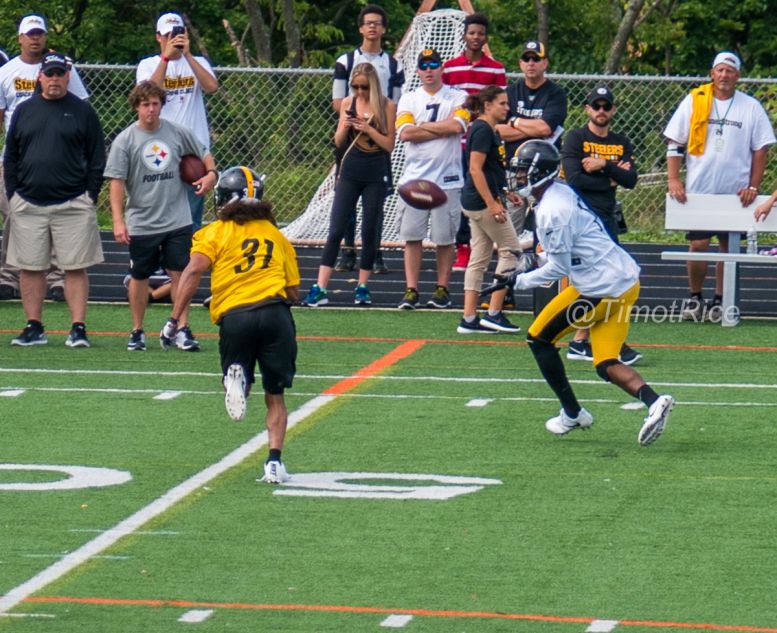 Now that the 2017 Pittsburgh Steelers training camp has concluded, we’re recapping everything that went down over these past 16 practices. We’ll break down each play, position-by-position, with final winners and losers at the end. Getting near the end with the corners.

Artie Burns: Man, his camp was like a weight off his shoulders. And yours. And probably Keith Butler’s too. Though we haven’t kicked off a regular season game yet, I am confident in saying Burns is already the top cornerback on the team. While he certainly didn’t shut down Antonio Brown, he was the only player on this defense who made life tough for AB.

Our final stats have Burns holding Brown to a 47% catch rate and just two touchdowns. Compare that with any other CB, mostly Ross Cockrell and Coty Sensabaugh, who allowed a catch 70% of the time and eight total touchdowns. It’s that iron-sharpen-iron mentality that will make facing any other receiver seem like child’s play. Burns is showing more physicality at the LOS and play strength down the field. His run fits and overall runs support has also taken a noticeable step forward. Was also happy to see him quickly return to the field after suffering a leg/groin injury during Friday Night Lights.

Ross Cockrell: The man you love to hate. Again, it’s clear Cockrell is no longer the best corner on the team and he’s never going to be anything more than a #2. But his camp is better than you think. Just as Burns took his lumps vs Brown, Cockrell took his against Martavis Bryant.

Cockrell continues to improve on a tackler and got off to a good start at camp, especially before Bryant returned. Several breakups against Justin Hunter. He also had a forgotten about breakup in the end zone against the New York Giants. Sure, it was not a great camp. At times, it got ugly. But it’s better than some have made it out to be.

William Gay: Gay had a fine camp. What’s remarkable about him is his consistency and durability. He got one veteran’s day off; beyond that, he didn’t miss a rep. He still makes plays on the football and flies in the backfield against the run. He’s at best, an average athlete, but there’s so much more about his game that makes him valuable and a fit in the slot.

Coty Sensabaugh: Similar to Tyson Alualu, a pleasant surprise. Sensabaugh doesn’t have elite physical tools but really strong ball skills. Maybe the second best on the team. Wish I would’ve tracked the number – maybe something for next year – but he was probably third on the team in pass breakups. Sensabaugh isn’t the most reliable tackler but certainly has the want-to and will support it with a high level of effort. He’s likely to be the top backup at both outside spots and maybe even in the slot, too. He didn’t see any reps there in camp but he’s played there in the past and asking Mike Hilton to step in would present its own challenges.

Greg Ducre: Unfortunately, it’s looking like Ducre’s season is going to come to a close in the near-future. Chris Adamski reported he was on crutches after injuring his left ankle against the Atlanta Falcons. The team hasn’t waived him as of this writing but it feels like it will occur soon. Ducre missed a chunk of time with an unknown injury but when he returned, worked as the Steelers’ second team RCB. He’s an above average athlete with impressive vertical and ability to time his jump.

Cam Sutton: We didn’t learn much about Sutton. He missed more time than anyone not named James Harrison, suffering a hamstring injury on the second day of practice and never returned to team drills. Very much an incomplete grade, though it’s looking like he has a chance to play this weekend vs the Indianapolis Colts.

Brian Allen: Allen got off to a difficult start, unsurprising for a raw rookie. While the physical tools were there, his technique was poor. No longer could he get away with his speed and length. At the start of camp, Allen was prone to getting out of phase at the top of routes, looking back for the ball and giving up space. But he seemed to turn things around in the win over the Giants, playing the ball perfectly on a nine route late in the game.

His run fits were surprisingly strong, even early in camp, and he profiles as a good special teamer, though I am looking for him to stay on his feet and finish more tackles. Allen warmed up to the task and learned from his mistakes. Pretty much all you can ask for.

Senquez Golson: I don’t want to disparage Golson anymore than what he already has. You know the story. Suffered a left hamstring injury running down a punt on the third day of practice, first in pads. Hasn’t practiced since and there’s still a chance he doesn’t appear in a game this preseason. The one day of padded practice he was in actually looked good, with a tackle and breakup along the sideline. It’s a shame. Seven practices in three seasons.

Brandon Dixon: As Tomlin says, better say “whoa” than “sick’em.” In a tweet, that’s a good way to sum Dixon up. He’s aggressive, has good hands, and can contest throws downfield. But few guys are as grabby as he is, showing that in camp and getting flagged twice against the Giants.

Matthew Marczi has aptly pointed out Dixon’s quality work as a gunner on the punt coverage team. With Ducre’s injury, there is a chance Dixon latches onto the practice squad.

Mike Hilton: Certainly one of the top camp darlings. Hilton is not a big guy or have any special athletic traits (4.55, 33.5 inch vert at Pro Day), but he plays with an overwhelming amount of confidence who can hit and make plays on the football. Rarely a day went by where he didn’t make an impact play and earned the praises of myself, beat writers, the coaching staff, or all three. All for a guy who visually looks like the weakest link.

Hilton has done everything he can to make the team. And seems poised to do so.

JaCorey Shepherd: Shepherd was added part-way through camp. A 6th round pick two years ago with some talent, Shepherd showed off an impressive vertical and ability to high point the football. His play time has been inconsistent depending on the health of the group. He’s better than what a team usually has at the bottom of their roster but there’s nothing there to be ecstatic about.