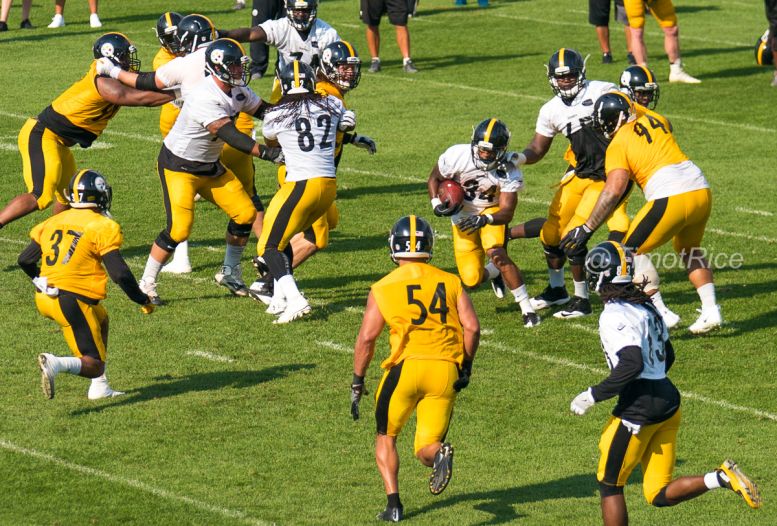 Getting you prepped for Day Six of Pittsburgh Steelers’ training camp. But before we do that, I wanted to include a TL;DR version of Day Three. Didn’t have a chance to get around to that in yesterday’s article.

Josh Dobbs not as good as he was Monday. Thew one pick and then nearly picked the next play. But certainly not terrible and for a rookie, had great command of the huddle and ability to bounce back when he does make mistakes.

Bart Houston made a couple nice throws. One of his better days. But still not a great one and he had the worst pass of the afternoon, throwing one right into Brandon Dixon’s hands for a pick six.

Trey Williams is an interesting guy. Burst and ability to make defenders miss in space. Lack of size (5’7, 195) doesn’t make him an obvious threat between the tackles but his short stature make hims difficult to find, too. Think he’ll bust off a big run and/or return in the preseason.

Terrell Watson has the power and anchor to square up in pass pro, doesn’t lumber as a back and is being used on kick returns. All around skillset that could get him on the practice squad. Steelers like to keep a big back hanging around on their.

Mentioned it on the podcast. Don’t want to freak but Jesse James and Ben Roethlisberger haven’t felt on the same page all of camp. Too much miscommunication and I think they’re 0-3 in the red zone, the biggest area where James needs to succeed.

Phazahn Odom…better on the sleds. But far from great. Or even average.

Marcus Tucker has been a pretty steady presence though he hasn’t made any particularly difficult catch.

Cobi Hamilton’s camp has not been very good so far. Definitely outside looking in, which is no shock.

There’s no question Justin Hunter has had an impressive start to camp but he’s winning where he should. Fade routes, go balls downfield, where he can use his immense physical tools. I bet anything Titans’ fans saw the same story. It’s about the nuances and details of his route running and there’s still been some problems there. Stir up the Kool-Aid, sure, but don’t chug it all yet.

JuJu Smith-Schuster with an impressive day back. Hit the ground running. Still hasn’t been tackled yet, though. Gotta check that box before you become a “real” NFL player.

Couple of the lesser known guys having good camps. Kyle Friend and Mike Matthews. Short, squatty dudes who use their leverage and show the ability to anchor. Mike Munchak is big on winning in your first two steps and I think they do.

Ethan Cooper and Matt Feiler cut from a similar cloth. But if I had to guess, I think Feiler makes the practice squad over him. Some good battles brewing.

Lavon Hooks ran second team LDE with Cam Heyward out (Alualu bumped up) and had a pretty good practice. He needed that, no question.

Real good practice for T.J. Watt. Killed it in the RB/TE one-on-ones. Broke up a pass to Jesse and then jammed David Johnson so well at the LOS the quarterback never even tried to throw the ball.

Good day all around. Vince Williams was back in pads and cracking skulls. Brandon Brown-Dukes and David Johnson served as victims. L.J. Fort was well-rounded, getting penetration in the run game and picking off a pass for Toussaint in one-on-ones. And Tyler Matakevich did similar, impressive downhill and in coverage, the latter a breakup from Ben to Grimble down the right seam.

Brandon Dixon and Mike Hilton had the first two picks for the secondary in camp during a team session. Long overdue. Hilton also blew past Williams on a blitz and got to the quarterback. It’s not impossible for him to make the 53. Brian Allen hasn’t played very well and the team is certain to keep just four safeties, unless they add at cutdowns. That means six cornerbacks make it.

Kind of a boring group now. Not a lot going no. Robert Golden still a sure tackle. Why he’ll make the team.

What To Watch For

– If Landry Jones misses again, or Roethlisberger gets a day off, more reps for Dobbs to soak up.

– Do want to see Watson bust a big run. Show he’s got the ability to create. If he can do that, very good chance he’s your practice squad guy.

– JuJu in the slot. Always interested in his work there. Lot of his plays came on the outside Wednesday.

– Jerald Hawkins. Not having the best time. A strong day tomorrow would be nice.

– Some of these reserve defensive ends. Come on guys, make a play. Christian Brown and Francis Kallon...looking at you. They’re lucky there isn’t a cutodwn to 75…or they’d be the first two to go.

– Want to get a better look at L.T. Walton at nose and Johnny Maxey at RDE.

– Sean Davis is someone to keep an eye on too. Looking for him to make an impact play.