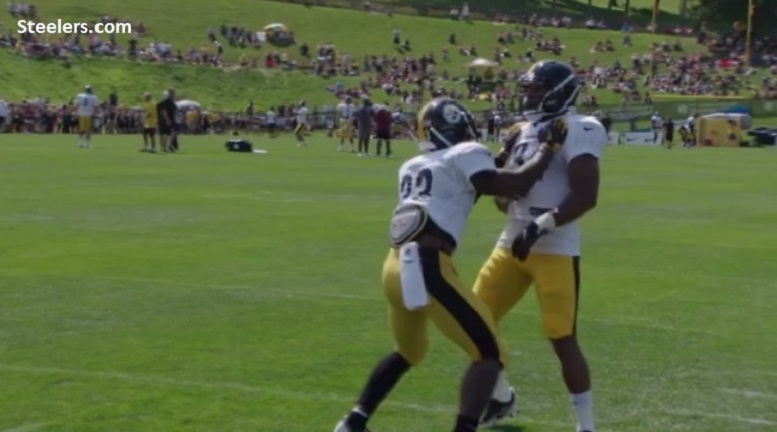 At the conclusion of the Pittsburgh Steelers first padded training camp practice on Sunday, head coach Mike Tomlin uncharacteristically pointed out one player who he thought performed well during the session and especially during the backs-on-backers drill. That player who Tomlin praised was none other than running back Fitzgerald Toussaint.

“Fitz Toussaint, I thought, specifically set a tone in that drill with his demeanor,” Tomlin said.

On Monday, Teresa Varley of steelers.com caught up with Toussaint and she asked him if it feels good to get such uncharacteristic praise from Tomlin and especially this early in training camp.

“My motto is to never get comfortable,” Toussaint said. “To come out here on a day-to-day basis and put in the work that has to be put in.”

Toussaint, the former undrafted free agent out of Michigan, was later asked if he knew why Tomlin praised him the way he did following Sunday’s practice.

“Just showing and putting my conditioning on display,” Toussaint said. “Doing some good things in the pass-pro and running the ball effectively and things like that. Most importantly, protecting the quarterback.”

If you have watched Toussaint’s limited play so far during his short career with the Steelers, you probably already know that his pass protection is perhaps the strongest part of his overall game. With that said, and outside of his second half fumble in the playoff game loss to the Denver Broncos a few seasons ago, he’s had his moments of productivity as both a runner and pass catcher as well.

With starting running back Le’Veon Bell an early training camp no-show this year and rookie third-round running back James Conner currently sidelined with a shoulder injury, Toussaint has reportedly been seeing a huge number of reps as the starter. He was asked by Varley what it means to him to get those extra reps.

“Every day’s an opportunity,” Toussaint said. “One of the best opportunities is to come out here and to show the young guys the way. Me being the oldest guy in the group, or one of the oldest guys in the group, I can just pass down what I know and give it to those guys so they can go out there and perform as well. So, that helps me be a better teacher and a better player.”

So what kind of things is he passing down to the group of younger running backs currently on the 90-man roster?

“Just technique-type things and just the plays and if they have questions, they know to come to me,” he said.

Every since the Steelers signed veteran running back Knile Davis early in free agency, Toussaint has pretty much become an afterthought in the minds of several in the fan base. Sure, it goes without saying that Davis is likely the better kick returner of the two, but Toussaint, at least in my mind, is the better running back.

Even if Toussaint ultimately fails to beat out Davis for a spot on the Steelers 53-man roster later this summer, a great showing during the preseason as not only a running back, but a special teams player, could ultimately result in him getting signed by another NFL team if he’s a cut-down casualty.

Touusaint is an easy underdog player to root for the remainder of the summer and personally, I won’t be surprised if he ultimately beats out Davis for a roster soot this summer and especially if his main competition doesn’t show he can upgrade the team’s kickoff return production. Not only that, Conner needs to show that he can remain healthy moving forward assuming his latest shoulder injury isn’t very serious.