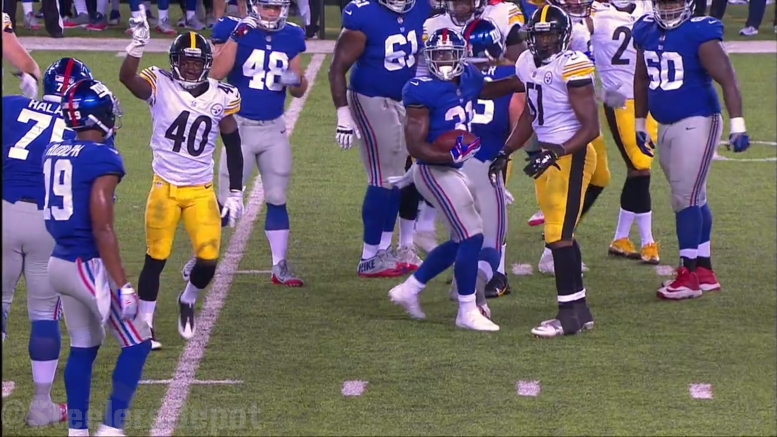 For as much attention as had been given to Pittsburgh Steelers first-year cornerback Mike Hilton, he did not spend any time playing with the ‘first-team’ defense that suited up and took the field during the team’s preseason opener. When that unit was on the field, the nickel cornerback was William Gay.

Now, Gay is (in all likelihood) going to be the starting nickel cornerback when the regular season opens, but throughout the offseason so far, when the Steelers have given the 32-year-old a veteran’s day off, they have frequently given those missing snaps to Hilton.

The starters did not play a whole lot of snaps against the Giants—a few drives—but with them likely to stay in the game deeper during the second preseason affair, it will be interesting to see whether or not the coaching staff chooses to work Hilton in with the first-team unit at any point.

Not necessarily to see if he can compete with Gay to take the starting job away from him, but simply to get him more reps against a higher level of competition, perhaps as training to take over as the backup slot cornerback when the regular season begins.

That obviously assumed that Hilton is going to make the 53-man roster, but he did not do anything during his preseason debut to dissuade his coaches from doing that. And he did it in areas in which he would have to do it to earn his keep.

The 2016 former undrafted free agent recorded three tackles on special teams. Two of them came on kickoffs, and one of them came on punts. Covering punts, he also induced a fair catch and was the first man down the field on a muffed punt that spilled over to him, which he recovered for a takeaway.

Other players in the past may have made a 53-man roster for a full preseason’ stat line like that on special teams. It’s not all that often that one player is able to record three tackles on special teams in one game, especially with rotating coverage units. The fumble recovery was a cherry on top.

And the blitzing success on defense was yet another cherry. Two cherries, you say? Well, when you record three quarterback pressures in as many pass rush attempts, including a sack, then yes, you get two cherries. Maybe we should start calling him Cherry.

But I’m getting sidetracked here. Hilton is coming off a very impressive preseason debut, even if his work on defense was not perfect. He lost his footing covering a screen pass and also gave up a seven-yard reception to convert on fourth down.

Will he be rewarded with first-team snaps in the second preseason game? We will have to wait and see.