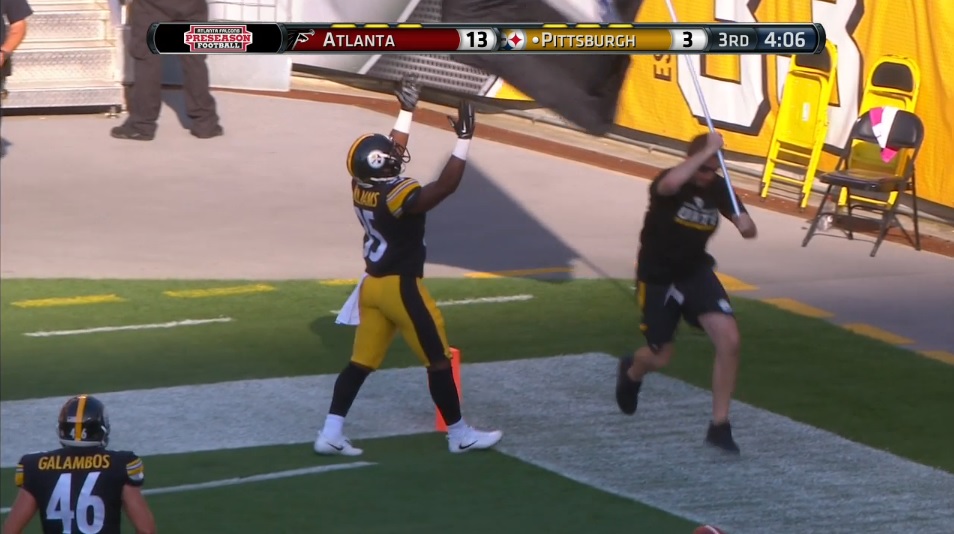 The Pittsburgh Steelers’ first team defense took on water today. If that continues into the regular season, Keith Butler is going to need a bigger boat.

The Atlanta Falcons’ first team offense marched over the Steelers’ defense, getting off to a hot start in a 17-13 win Sunday afternoon. On their first drive, Atlanta moved the ball 91 yards on ten plays, capped off by a Terron Ward rushing touchdown from five yards out. Matt Ryan found Austin Hooper on 3rd and 10 for a 14 yard gain, aided by a William Gay missed tackle. It was the only third down Atlanta encountered on the drive.

Following that was a 14 play, 76 yard excursion that resulted in a Matt Bryant field goal. The offense, started by Ryan and finished by Matt Simms, attacked the middle of the field. The whole unit struggled but Robert Golden and Ross Cockrell were picked on the most. Cockrell was beat on a slant on 3rd and goal but the pass was dropped, saving a little bit of face.

Nose tackle Javon Hargrave left the game to be evaluated for a concussion. He did not return.

Ryan finished the day 4/6 for 57 yards for the Falcons.

The Steelers offense had trouble getting going in the first half. Josh Dobbs got his second start but struggled with accuracy on short to intermediate routes. By the end of the first half, the Steelers were 1/6 on third down, one of the only highlights coming from a nice back shoulder grab by Martavis Bryant.

James Conner seemed to deal with first game nerves, stumbling over himself as a runner and dropping a 3rd and 4 pass that would’ve resulted in an easy first down, taking his eyes off the ball before securing the pass.

At halftime, the Steelers were outgained 259-76. Roosevelt Nix ended the first half on a high note, blocking a Matt Bosher punt as time expired. At half, Atlanta led 13-3.

The second half wasn’t much more fruitful for the Steelers’ offense. Even when given good field position, starting at the Falcons’ 38 on a third quarter drive, they couldn’t move the ball. Another Conner third down drop didn’t help matters. Conner did rip off an 11 yard run early in the third quarter, his best play of the afternoon.

The best offense was the Steelers’ special teams. Trey Williams brought back a punt 64 yards for a score late in the third quarter, juking two defenders before cutting upfield and running through another Falcon as he crossed the goal line. Williams had been limited in camp with a hamstring injury but clearly made today count. His touchdown cut the Falcons lead to three, 13-10.

After a three and out by Atlanta, the Steelers’ offense stumbled again. Dobbs booted to his left on 3rd and 1. Under pressure, he tried to flip the football underhanded to Jake McGee but the pass was intercepted by Quincy Mauger. Jordan Dangerfield bailed him out, picking Simms the ensuing play.

It wasn’t until, of all people, Bart Houston took over the offense did they start to chug. He led the team on a seven play, 53 yard drive. James Conner found his groove, busting off runs of 17 and 19 yards. After Houston caused a delay of game on third and goal, he hit Justin Hunter on a curl, diving in over the goal line for the score and 17-13 lead.

The Steelers’ defense responded in turn with sacks by Roy Philon and Farrington Huguenin. With one last possession late in the game, Brandon Dixon broke up a 4th and 15 heave down the right sideline.

NOTES: In addition to Hargrave, Steven Johnson (hamstring) and Greg Ducre (ankle) left with injuries….Conner finished the day 20 carries for 98 yards….Sammie Coates caught three passes for 20 yards…Anthony Chickillo recorded a pair of sacks…seven of Jordan Berry’s eight punts landed inside the 20…Pittsburgh begins the preseason 2-0 for the first time since 2010…the Steelers will take on the Colts next Saturday at 7:30 PM/EST.