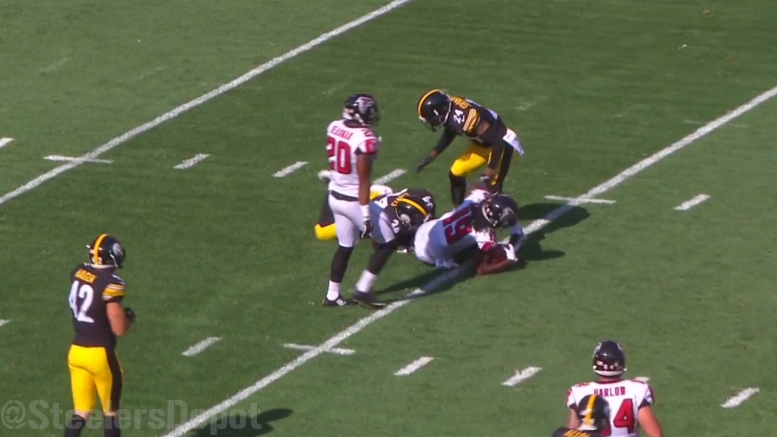 While the Pittsburgh Steelers may have come out of Sunday’s game with a victory, I don’t think that either offensive coordinator Todd Haley or defensive coordinator Keith Butler were too happy with what they saw. Special teams coordinator Danny Smith? I’m sure the was doing cartwheels, because his units were a bright spot, for sure.

While the kick return game was merely average at best—the return numbers are a little better than they look because the Falcons tried to keep the ball out of the end zone—virtually everything else went rather well for a coach that many wanted to see fired last year.

Highlighted by a 64-yard punt return for a touchdown by Trey Williams, who is trying to throw his hat into the ring for a spot on the 53-man roster, both coverage units also had strong days, which punter Jordan Berry is no doubt very happy about.

I already talked about the third-year punter’s big day yesterday, even suggesting that he may have been the team’s most valuable player on the field on Sunday. He put seven of his eight punts inside the 20-yard line, including one on the four-yard line thanks to an assist from Greg Ducre keeping it out of the end zone.

Brandon Dixon, meanwhile, got a pressure and a pass defensed on defense, but working as a first-team gunner on special teams, he was responsible for four or five induced fair catches on the punt coverage unit. Mike Hilton still played well as the other gunner, as well.

Of course, another highlight was Roosevelt Nix’s blocked punt at the end of the first half, even though time expired by the time that the Steelers were able to gain possession of the ball. Nix helped himself make the team two years ago with a blocked kick.

Another big thing that really should be talked about is the fact that the special-teams units played penalty-free football, which was a major recurring problem for the Steelers during the regular season a year ago. In fact, they drew two or three penalties against the Falcons.

There were also some highlight tackles on the coverage units provided by Knile Davis, Jordan Dangerfield, and Malik Golden, all of which pinned the Falcons deep—or at least inside the 20-yard line—within their own territory.

Chris Boswell even made his lone field goal attempt from 42 yards out, and as the cherry on top, rookie long snapper Colin Holba was credited for downing a punt—though admittedly he was not the first player in coverage down the field after the returner was chased away from the goal line.

Some of the names mentioned in this article are not going to make the team. Others are going to because of the sorts of things they contribute that get mentioned in articles like these. This is why special teams is valuable and has to be taken into consideration when assembling a 53-man roster.