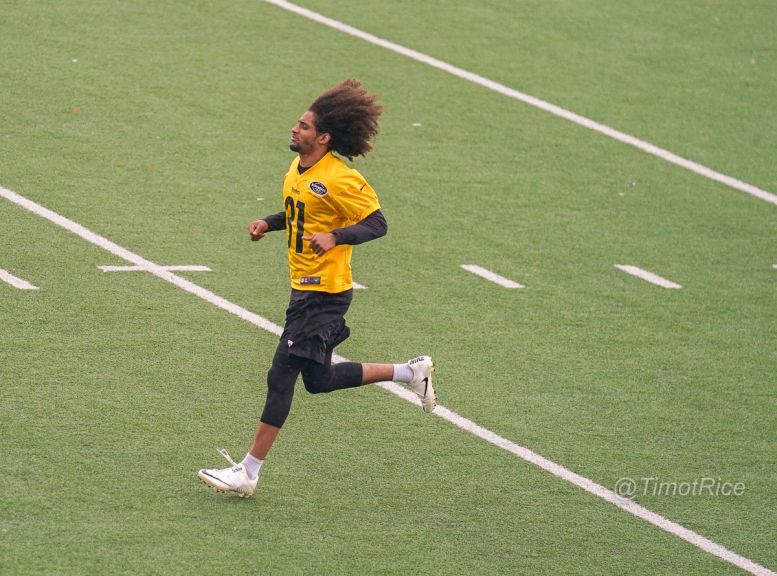 One of the main storylines throughout training camp so far has been the daily skirmishes between All-Pro wide receiver Antonio Brown and his budding arch enemy, second-year cornerback Artie Burns. Through the first six practice sessions, the former first-round draft pick has been shadowing Brown all over the field during most reps.

It’s all part of the cornerback’s development as he looks to take a giant leap forward in year two after the small step of his rookie season. Burns, who came out of college as a somewhat raw underclassman, made strides, but by all accounts he has been a different player so far this year.

Still, there’s only one Antonio Brown, and there are…well, a lot more cornerbacks than that. And despite the fact that he is on the record in favoring going up against bigger wide receivers, Ross Cockrell wants his shots against the best in the game as well.

The fourth-year cornerback, who has spent the first six practices primarily going up against Justin Hunter, and who will probably be primarily responsible for covering Martavis Bryant in practice once he is fully reinstated, knows that to be the best, you have to beat the best. And Antonio Brown, well…he is the best.

“I want to go against Antonio Brown just as badly as Artie Burns does”, the veteran told Joe Rutter during practice yesterday. While he said that Mike Tomlin “has made his decision”, he also added that he is “working on coach to try to change that decision a little bit”.

“He’s one of the best in the league”, he said, speaking the obvious. “When you have a guy like that who works hard, who is strong, is quick, runs precise routes, it just takes your game to another level so you can cover anybody in the league”.

Cockrell often gets the cold shoulder from fans who are ready to embrace Burns as the Steelers’ greatest cornerback since Rod Woodson, but he doesn’t intend to take a back seat to any other player, regardless of where they were drafted.

“Artie and I share the same goal”, he told Rutter. “We both want to be number one corners”. And he was the Steelers’ number one corner last season. They even used him to shadow wide receivers a few times early in the season before Burns was part of the nickel defense.

Cockrell has seemingly gone largely unnoticed so far for the most part while most of the attention at the cornerback group has been paid to Burns and others. Mike Hilton has been a good story, Senquez Golson a bad one, but both of them have been more-widely discussed.

While the Duke product isn’t necessarily interested in getting the attention, that doesn’t mean that he holds himself to a lesser standard on the field than does any of his teammates. He intends to be the best they have. If you’ll excuse the frustratingly astronomically inaccurate slogan, when you shoot for the moon, you still end up among the stars.