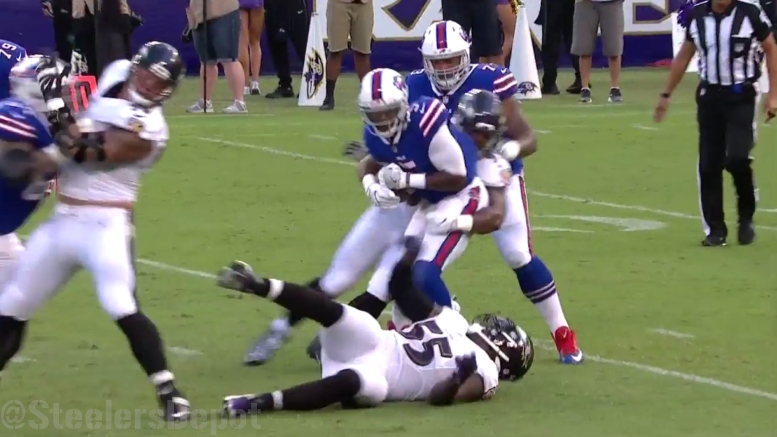 The Baltimore Ravens are 3-0 during the preseason, and they have managed to do so with their offense hardly even being able to score—at least, not their first-team offense going up against first- and second-team defenses. Some late scores by reserves have factored into those wins, to be sure.

That is not something that the Pittsburgh Steelers’ starting defense could say, as they gave up opening drive touchdowns in each of the past two games. They certainly have not played as well as the Ravens’ defense has, although they have also been a little more banged up on that side of the ball.

They did see starting cornerback Jimmy Smith leave the game with a hand injury, later seen with the injured appendage wrapped in a thick wrap of ice. Smith has missed a lot of practice time this summer, as has rookie first-round cornerback Marlon Humphrey, who could still possibly end up as their nickel cornerback.

The Ravens knocked out Buffalo’s starting quarterback, Tyrod Taylor, out of the game early on when second-year outside linebacker Matt Judon slammed him down recording a sack—the team’s only sack of the game. Taylor completed just one of three passes for one yard by that point.

The Bills essentially when three-and-out on their first two drives, with the second only bought by one extra play because of an illegal contact penalty on an incomplete pass on first down.

They did manage to drive into Ravens territory on the third series, and that was even after being docked with a hold that made it first and 20 from their own 25-yard line, but the drive ultimately stalled at Baltimore’s 44, where they were forced to punt.

It didn’t get any better after that, as the following drive ended in a strip sack deep in their own territory, though they managed to recover it and punt the ball away. Naturally, their offense was so poor that they failed to even get a first down and failed to convert on fourth and five.

While the team was without several key players on offense, not the least of whom being their starting quarterback, this does appear to be shaping up to be the theme of the season. The defense is going to have to keep them in games while hoping that the offense can do just enough. Jeremy Maclin has one catch for five yards this preseason.