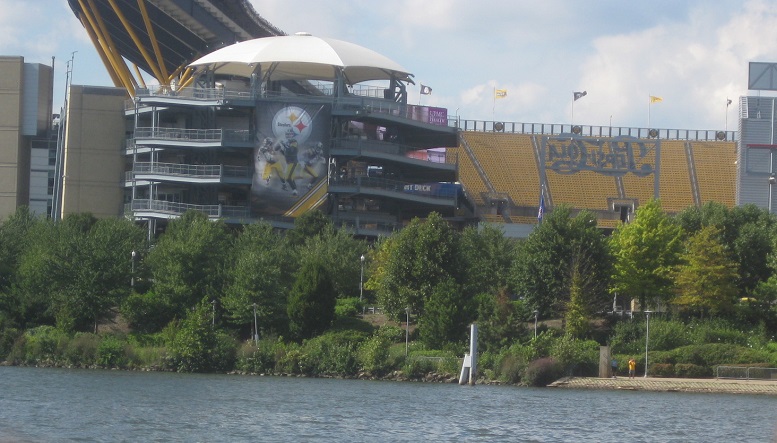 Drove up to the Burgh to get a first-hand look at the Pittsburgh Steelers in their second preseason game. The announced crowd was over 48,000 so Heinz Field was just over 70% full. Not bad for a preseason game. I parked at Station Square which is on the south shore of the Monongahela River and took the clipper which goes right by the point where the Ohio River begins to the north shore of the Allegheny River and Heinz Field. A very picturesque way of arriving at the stadium … and cost effective. $10 to park at the garage on Commerce Street and $12 round trip for the boat ride.

Met lots of Steeler fans; many local but others that had come in from Ohio, New Jersey, New York and me from Maryland. Several were making their first ever game; other grizzled veterans who recall Three Rivers Stadium with fondness. One fan had gone to games at Pitt Stadium. One thing all had in common; they were excited about the prospects of the Steelers this season. One of the rumors going around was the extent of Juju Smith-Shuster’s injury. Comments such as, “it’s a torn ACL they took an MRI to confirm.” The amount of misinformation overheard was stunning.

Missed warm-ups but did get to see the Steelers gathering in the tunnel just prior to kickoff. James Harrison had his stink eye on. It was cool seeing Martavis Bryant in there after a layoff. A couple young players who didn’t have their helmets on yet had starry-eyed gazes. The starting defense was announced so the bulk of the team ran out – but then Ben Roethlisberger had to elbow his way in from the back to run out onto the field wearing a ball cap. Deebo got the loudest, by far, cheer when he came out onto the field.

I’ve prattled on about events leading up to the game; mostly to avoid the first few drives. Pittsburgh receives the opening kickoff and goes three and out. Atlanta Falcons score on their first three possessions making the Steelers defense look silly. Watching Ross Cockrell desperately trying to play catch-up with Reggie Davis was sickening. A brief reason to cheer on the very next play when Anthony Chickillo sacks Matt Ryan … no Matt Schaub … no Chris Simms? … no Matt Simms. So, a 3rd string quarterback that has completed 48.7% of his 39 NFL career passes is toasting what is supposed to be a top 10 Steelers defense.

Yes but, the Steelers held out Bud Dupree, Ryan Shazier and Mike Mitchell. Yes but, the Falcons held out Julio Jones, Devonta Freeman and used a 3rd string quarterback other than the first drive. The Steelers did shut down the rushing attack but the Falcons still used play action effectively. The Black & Gold defenders were aggressive at shutting down the run but just having to shift from toe to heel to cover the receiver gave a less than journeyman quarterback open receivers.

The Steelers offense did not help much. Four of five drives in the first half were punts: three of those were three and outs. Joshua Dobbs did complete a 23-yard pass to Martavis Bryant that led to a feld goal. I was more impressed with Bryant’s effort to catch the ball than the throw itself. He made up for the botched end around that he fumbled with the ball luckily going out of bounds. That field goal kept the Steelers within range. Roosevelt Nix got the crowd fired up by blocking a punt to end the half. This should easily be 21 or 17 to 3; Steelers fortunate to be down 13-3.

The 3rd quarter was old timey football. The two teams combined for six punts and then ended the quarter with back to back interceptions. Special teams were highlighted this quarter with Trey Williams returning an Atlanta punt for 64 yards for a touchdown. At times, I thought he wasn’t following his blocks, maybe the Falcons couldn’t see him, but what an effort. The Steelers punt coverage units looked good getting down the field to prevent returns. Greg Ducre was hurt covering one; he was limping badly off the field with assistance. He might not be available the next game as he could hardly put weight on his foot as he hobbled off. Jordan Berry averaged less than 40 yards on eight punts during the game, but seven were inside the 20. Joshua Dobb’s last pass of the game was ugly. He was scrambling and went to shove the ball to Jake McGee but it floated into a Falcon defender’s hands. Atlanta went for the throat passing long on the very next play but Jordan Dangerfield picked it off to prevent another Falcon score. Bart Houston came in to relieve Dobb’s with 30 seconds left in the 3rd quarter.

The 4th quarter had four punts and had back to back interceptions. Pittsburgh did have a touchdown drive that featured strong runs by James Conner; a couple nice catches by Sammie Coates; and was capped by Justin Hunter’s touchdown ala Antonio Brown (catching the ball short of the goal line and making the stretch to score the points). Two questions for me: Who does Mike Tomlin give the bone to today –  Coates or Hunter? Also, was James Conner’s 98 yards rushing more impressive than his two drops were concerning?

Dangerfield got another interception with just over two minutes left; but Bart Houston tossed the ball up to Justin Hunter who was triple covered after Conner failed to convert on 3rd and 2. Atlanta got the ball back on the interception but then gave it up on downs.

Overall; a mediocre outing. Special teams appeared very solid … without Darrius Heyward-Bey who was hurt early in the game. The defense showed itself susceptible to the pass, especially play action. Hard to gauge the offense without Ben Roethlisberger. James Conner showed he can play an entire game but he seems to run too upright to me. Vince Williams was beat on coverage but prevented yards after catch with sure tackling. William Gay had a missed tackle that would have prevented a first down but Artie Burns did not get there fast enough to finish the play allowing the receiver to free his ankle from Gay’s grasp and advance the ball. Not ready to panic yet; but not so sure this team should be considered a favorite to make it to the Super Bowl just yet.

I sat in my seat for about five minutes after the game; watching the Steelers say their farewell’s to the Atlanta team then headed back to catch the clipper. On the drive back home, I heard Alex Kozora’s name mentioned on Steelers Nation Radio; the caller was asking a question and mentioned Steeler’s Depot coverage of training camp and specifically cited Alex. But now, I can’t remember the question. Did anyone else hear it?

Well training camp is over; two preseason games are in the can. Two more are on tap. 89 of the 90 players on the Steelers roster have reported and are practicing, attending team meetings; position group conferences preparing for a run at the championship. Here is some music from the missing one: On a Mission  I hope his mission is a Lombardi …

He is not the first Steeler to express himself musically: I’m so Lonesome I could Cry  maybe you appreciate Le’Veon Bell’s music better now; I prefer Terry Bradshaw’s  rings over either winning any Grammys. Le’Veon you’ll have your chance for your life’s work; but please help out with a couple more rings first.